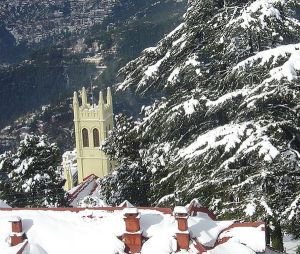 The minimum temperature in Manali was 0.6 degrees Celsius below freezing point.

Keylong in Lahaul and Spiti district was the coldest place in the state with minus 3 degrees Celsius.

It was 9.4 degrees above freezing point in Dharamsala, minus 3.2 degrees in Kalpa and 3 degrees in Shimla. Shimla last got snow Dec 14.

Shimla’s commercial centre Mall Road, the historic Ridge, the US Club and Jakhu hills received a relatively thick layer of snow while snowflakes covered the lower parts of the town.