The 13 would also quit the Bharatiya Janata Party soon to join the Karnataka Janata Party (KJP), which Yeddyurappa formed and is leading after he left the BJP and the assembly Nov 30. 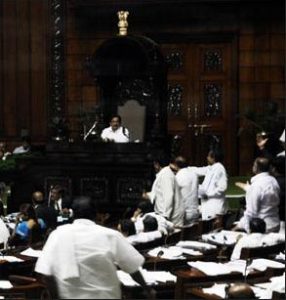 The resignations are part of a plan by Yeddyurappa to try to prevent Chief Minister Jagadish Shettar from presenting the budget for 2013-14 in the assembly on Feb 8. The assembly’s 10-day budget session is scheduled to begin Feb 4.

Bopaiah is expected to take some time to decide on the quit letters, though these legislators are demanding their immediate acceptance.

Among the 13 are three who were ministers in the Shettar cabinet. While C.M. Udasi and Shobha Karandlaje quit as ministers last Wednesday, Sunil Vallyapure had resigned last month. Udasi handled public works department, Karandlaje energy, and Vallyapure infrastructure development.

The BJP, in an apparent strategy to delay the acceptance, has made two of its assembly members petition Bopaiah to disqualify 12 of these legislators for “anti-party” activities as they had participated in a public rally to formally launch the KJP and took part in other meetings of that party.

The petition was filed Monday.

The resignation of the 13 legislators from the assembly would not threaten the survival of the Shettar ministry as the ruling party would still have 105 members, including the speaker, in the 225-member assembly with two vacancies.

The BJP also has the support of one of the seven Independent members who is a cabinet minister.

The Congress has 71 members and the Janata Dal-Secular 26. One is a nominated member.

The resignations were to be submitted to Bopaiah last Wednesday but could not be done as he went out of Bangalore the previous day.

Upset that he was not present in spite of being informed Tuesday about the plan to meet him the next day to submit the resignations, the legislators had met and complained about the development to Governor H.R. Bhardwaj.

They had also given Bhardwaj copies of their resignation letters and urged him to intervene for their immediate acceptance by the speaker.

After keeping quiet for three days on his whereabouts, Bopaiah said late Friday that he had been to Nepal on a “private visit”.