Shimla: Presided over by chief minister Virbhadra Singh, who took oath of office in the morning, the Himachal cabinet at its first meeting today decided to adopt the party manifesto as the government official policy document, terminated all extensions and re-employments, decided to review decisions of the previous government taken in the last 6 months and decided to convene a 4 day winter session at Dharamshala starting from 8 January. 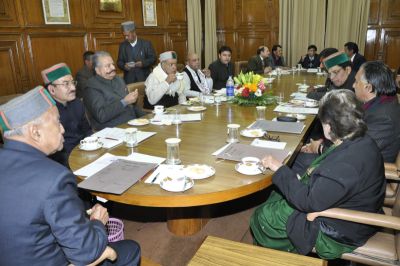 A government spokesman said that the cabinet at the outset thanked the people for handing Congress party the mandate to form the government.

Deciding to hold the first assembly of the 12th Vidhan Sabha at Dharamshala from 8 to 11 January, the cabinet decided that since it would be the first session of the new Vidhan Sabha, in a new calendar year, it would begin with a governor’s address.

Election of the speaker and deputy speaker would also be held during the winter session and oath of legislators would also be given to the newly elected members of the legislative assembly, the cabinet spokesman stated.

The cabinet decided to withdraw all criminal cases registered on political grounds and for political agitations, where no violence and breakages were involved.

It was decided to review all notified school that had been closed during the last five years. The cabinet also decided to frame a policy for regularization of PTA teachers.

Employees who were on taken up on secondment basis in the secretariat but had been reverted back to their parent departments were approved for being taken back into secretariat employment by the cabinet.

The cabinet decided to adopt the congress party manifesto as the official government document.

It was also decided to terminate all extensions and re-employments forthwith. All decisions taken by previous government in last six months are to be reviewed by the new government, the spokesman stated.