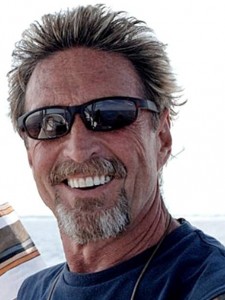 Guatemala City:  US software tycoon John McAfee Wednesday, via his attorney, presented a formal asylum request to Guatemala arguing that he is being “politically persecuted” by the government of Belize, the country where he settled in 2008.

A spokesman for the Guatemalan Foreign Ministry confirmed to EFE that lawyer Telesforo Guerra filed the petition.

A few hours earlier, Foreign Minister Harold Caballeros had said that if McAfee presented a formal asylum request, Guatemalan officials would begin collecting information to be able to respond to it.

“We know that Belize wanted to question him about the death of a neighbour, that is what I understand, (but) there is no formal accusation,” said the foreign minister.

McAfee, 67, the creator of the famous antivirus software programme that bears his name, appeared 2 days ago outside the high court here and announced that he would request asylum in Guatemala after declaring that he was being politically persecuted by the Belize government, a “very corrupt” government, that he said sent its soldiers to harass him because he had decided to stop financially supporting it.

The eccentric millionaire had remained in hiding for several weeks and had put out false clues about his whereabouts on his blog to elude Belize authorities, who want to question him about the Nov 10 murder of American ex-pat Gregory Faull, his neighbour in the town of Ambergris Caye.