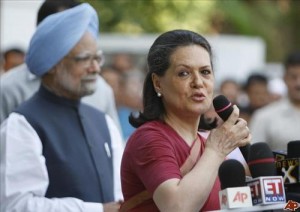 As leader of India’s ruling party, Sonia Gandhi, 65, who was ranked sixth on Forbes list of Power Women, “has the reins of the world’s second-most-populous country and tenth-largest economy”, the US business magazine said.

“Son Rahul is next in line to take over India’s most famous political dynasty,” it suggested.

Listing Manmohan Singh, 80, 19th on the power list, Forbes says: “Oxford- and Cambridge-educated economist is the architect of India’s economic reforms, but Singh’s quiet intellectualism is increasingly seen as timid and soft.”

Among the 14 newcomers to the list are LinkedIn co-founder Reid Hoffman (No. 71), the world’s most powerful venture capitalist and SpaceX CEO Elon Musk (No. 66), the entrepreneur behind Paypal, Tesla Motors and the private space industry.

They are joined by President Francois Hollande (No. 14) of France, North Korea Supreme Leader Kim Jong-Un (No. 44) and Microsoft CEO Steve Ballmer (No. 46).

Among the drop-offs are Chinese President Hu Jintao, who is on his way out of office and US Treasury Secretary Timothy Geithner and Secretary of State Hillary Clinton – both of whom have announced they won’t return to their powerful posts for Obama’s second term.

Forbes said it assembled the list using four criteria: power over lots of people, financial resources controlled, whether the person has power in various spheres of life, and whether that person actively uses their power.