“Rise of the Guardians” is first time director Peter Ramsey’s take on William Joyce’s book series – “Guardians of Childhood” and his short film “The Man in the Moon”. The 3D animated film revolves around folklore characters such as Santa, the Toothfairy, the Easter Bunny, and the Sandman, all of whom reside in a colourful world, all brilliantly depicted.

The film begins with a beautiful prologue showing Jack Frost (voice by Chris Pine) waking up in an ice-cold lake with no recollection of how he got there or who he is. Soon, Jack realises he has been given the power of cold weather. He possesses a crooked magical staff with which he creates slippery ice, snow days, and lots of cold mischief for kids.

Three hundred years later or so, the film picks up at the top of the world where ‘Santa’ like North (Alec Baldwin) is busy preparing gifts for Christmas, when he sees that the evil boogeyman Pitch (Jude Law) has begun frightening little children with terrifying nightmares.

So, North, along with the other Guardians – Bunny (Hugh Jackman), Tooth (Isla Fisher) and Sandman, try to convince Jack Frost to join their group and stop Pitch before children stop believing in them, and magic, forever.

There is enough in the movie to entertain kids as well as their parents. The film has got a kind heart, a nasty villain, and a fast pace that rarely slows down.

The characters are peculiar and different. Though they’re all familiar characters, but look and sound differently to how you’d expect. 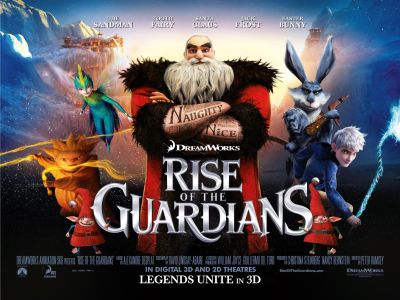 North has a thick Russian accent and heavily tattooed arms. Bunny is a Crocodile Dundee-type hero, with a broad Australian accent and a boomerang.

Tooth is a hummingbird multi-tasking her little fairies, Jack Frost is a carefree teenager, Pitch is an evil Voldermort-esque English devil, and the tubby Sandman is mute, communicating via pictures, which appear above his head in gold sand. It’s strange, but somehow works.

Ramsey’s forte as a storyboard artist comes out very prominently in the film. There are so many fascinating elements! The way the Tooth fairies were designed, the way each tooth-case opened up with a person’s memories, how Santa was a dual sword wielding Russian or how his workers were yetis instead of the elves, the Easter Island with egg type juggernaut walking around… etc. etc. The list can go on.

But on the other hand, bad man Pitch’s get-up was very unimaginative and boring.

Visually it’s all there – it is beautifully designed with fast paced animated action adventure, and full of epic magical battles.

But the same can’t be said about the narrative. The film presents a surprisingly heartfelt, though often predictable, story about the power of belief and the importance of companionship.

Some viewers will, no doubt, scoff at the belief “message” – since, for anyone who no longer believes in Santa, or Sandman, the core message loses some of its magic.

Also, a lot of dialogue also comes out heavy handed, which makes the movie feel like it was written to patronise the older audience.

There’s so much to look at – every frame bursts with life. All of the characters, even those with no consequence look unique, the backgrounds are colorful, the 3D subtly used, and the ‘camera’ moves similarly to a live action film thanks to director of production Roger Deakins, who serves as a visual consultant.

The film works for those who are a sucker for folklore and magical moments.