New Delhi: As Ratan Tata steps down as chairman of India’s largest industrial house Friday, he leaves behind for his successor at Bombay House, Cyrus Mistry, not just a $100-billion empire he helped grow 13-fold in the 21 years at its helm but also a legacy that earned him wide praise as an able corporate leader with values. 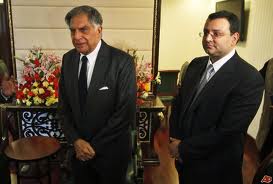 Tata joined Tata Group as an apprentice on the shop floor of Tata Steel’s Jamshedpur plant in 1962. He took over the top job in 1991, succeeding uncle JRD Tata, at a crucial time when India began its market liberalisation programme and his peers at the “Bombay Group” argued against it and sought a level-playing field for their businesses.

In the more than two decades at the helm, the Cornell-educated Tata not only consolidated the group’s business in domestic markets but also expanded it globally, acquiring assets, diversifying businesses and forging new linkages.

In recent years, he conceived and presented to the world the smallest car “Nano”. Much before that, in 2008, the Government of India honoured him with its second-highest civilian award, the Padma Vibhushan.

“Ratan has built very adroitly on the grand foundations built by his predecessors, especially JRD. He has not only nurtured the Tata DNA but reshaped it for the new age,” Says Bajaj Group chairman Rahul Bajaj.

“The very fact that he is retiring at 75 speaks volumes of his commitment to managing the Tata companies through values,” Bajaj added.

Tata Group’s market capitalisation, which has some 30-odd listed companies, is now nearly Rs.4.54 trillion ($825 billion), 33 times more than in 1991 when Tata took over the top job. During this period, the group’s aggregate sales have increased 43 times, while net profit has grown 51 times.

Another big acquisition was of iconic British auto makers Jaguar and Land Rover by Tata Motors.

The Group under Tata’s leadership also made serveral other acquisitions in the global and domestic markets.

These include acquisition of controlling stake in government-run Videsh Sanchar Nigam Ltd (VSNL) by Tata Sons, purchase of heavy vehicles unit of Daewoo Motors in South Korea by Tata Motors, acquisition of Singapore’s NatSteel by Tata Steel and purchase of New York-based The Pierre hotel by Indian Hotels Company.

According to those following the Tata Sons story, it was to Ratan Tata’s credit that the group entered new businesses like telecommunications, finance and retail and increased focus on information technology and renewable energy.

At the same time the Group, they add, he led the exit from sectors like cement, textiles and cosmetics, while embarking on new areas. Today, as a result of that, the Tata empire has in its fold the most profitable company in the information technology busines — Tata Consultancy Services.

Godrej Group chairman Adi Godrej said Ratan Tata leveraged the strength of TCS and Tata Motors while getting out of businesses such as Tata Oil mills and Lakme which were not a strategic fit.

“His clarity of thought and vision for the group has shone through remarkably,” said Godrej, who is also the head of industry lobby Confederation of Indian Industry.

Ratan Tata is retiring from the Tata Group’s top job as he turns 75, a rule he himself framed. He, however, will remain as chairman emeritus of Tata Sons. Cyrus Pallonji Mistry, 44, who was selected by a panel of eminent people, succeeds him.

Mistry will be the sixth chairman of Tata Group in its 144-year history and only second who does not carry the “Tata” surname. Other people who held the position of chairman of the Tata Group, apart from Ratan Tata, are: Jamsetji Nusserwanji Tata, Sir Dorab Tata, Sir Nowroji Saklatwala and J.R.D. Tata.

Ratan Tata’s departure from the iconic Bombay House in downtown Mumbai marks the end of an era in which India looked outward and its business went global.