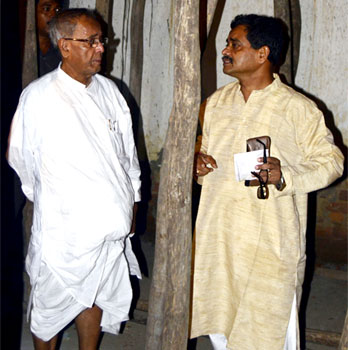 While Abhijit Mukherjee has drawn much flak for terming as “highly dented-painted” the women who participated in the mass protests at Delhi after the recent gang-rape incident, Rahman landed in a soup after asking Chief Minister Mamata Banerjee what she would charge for getting raped.

Facing all-round condemnation, both men apologised and withdrew their comments.

People, however, are not inclined to forget and forgive these “objectionable remarks”.

Another Bengali daily “Bartamaan” said Rahman has turned a “villain” in the CPI-M and the Left Front for his “obnoxious” attack on Banerjee.

It said Mukherjee, an MP from Jangipur, landed his own party in trouble with his comment.

Software engineer Summon Biswas said both the leaders deserve to be condemned in the strongest possible language: “If a woman applies make-up, does that bar her from protesting? As the son of our president, who has always been circumspect with his use of words, Abhijit should have displayed better sensitivity.”

“At a time when the nation is enraged over a gang-rape, Rahman has shown his total lack of culture, taste and proper education,” the engineer said.

Banker T.P. Dutta said he was “shocked” by the level of public discourse. “If those in public life make such remarks, it only shows that there are miles to go before the attitude towards women changes in society,” he said.

Eminent writer Suchitra Bhattacharya said: “Anisur’s comments are humiliating. Perhaps only those in politics are capable of such comments.”

Speaking to a Bengali-language television channel in his earlier assembly constituency Nalhati in Birbhum district, Abhijit Mukherjee said on Christmas Day that “highly dented-painted” women visited discotheques and then appeared at India Gate to protest the Delhi bus gang-rape.

“What’s basically happening in Delhi is somewhat like Egypt or elsewhere, where there was something called the Spring Revolution, which has very little connection with ground realities. In India, staging candle-light marches, going to discotheques – we did all this during our student life too, we were students too – I know very well what kind of character students should have,” Abhijit said.

“Those who claim to be students – I can see many beautiful women among them they were highly dented-painted – they’re giving interviews on TV, they’ve brought their children to show them the scenes,” he said.

“I have grave doubts whether they’re students because women of that age are generally not students,” said Abhijit, who was elected an MP from Jangipur Lok Sabha seat in Murshidabad to fill up the vacancy caused by his father’s elevation to the presidency.

Meanwhile, addressing a meeting of the party’s peasants wing Krishak Sabha in North Dinajpur’s Itahar, CPI-M leader Rahman had ridiculed the Banerjee government’s decision to compensate victims of crimes against women like rape and trafficking.

“We have told the chief minister in the assembly that the government will pay money to compensate rape victims. What is your fee? If you are raped, what will be your fee,” asked Anisur Dec 25.

“As an opposition leader, she took along Champala Sardar from South 24 Parganas district to the state secretariat, claiming she was raped.”

“We then told her: “Don’t bring such hela fela meye (girls without any position in society). Bring some good girls.”

“And there can be no better girl than you. You can say you have been raped. We ask, didi moni (elder sister), what is your fee? How much will you take for getting raped,” he asked.