Bhubaneswar: Hundreds of villagers, including tribal men and women Thursday held a meeting in Odisha’s Kalahandi district to reiterate their strong opposition to Vedanta’s alumina refinery and mining project in their region, police said.

Shouting slogans against the company, the tribal men and women, armed with their traditional weapons, assembled at Lanjigarh, about 500 km from here, and sought complete dismantling of the refinery which was closed down temporarily a day ago due to shortage of bauxite. 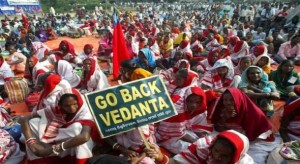 “The plant has been built illegally. Why the company has temporarily closed it down? It should dismantle it completely,” Prafulla Samontray, an anti-displacement leader who attended the gathering told IANS.

“The refinery is polluting our environment. No mining permission should be given to the company,” Siddharth Nayak, president of Kalahandi Sachetana Nagarik Manch said.

He said over 7,000 people attended the protest meeting.

The state government and the officials of the company, however, said the refinery has created employment opportunities for thousands of people and contributing to the economic growth of the region.

Vedanta Aluminium Limited’s one million-tonne-per annum refinery in Lanjigarh has about 550 regular staffs. It has provided indirect employments to thousands of people, a senior company official said.

Vedanta had entered into a supply arrangement with Odisha government who was to supply bauxite through a state agency from Niyamgiri Hills located near the refinery.

It has also applied for several other bauxite reserves in the state, but none of them have materialised so far.

After facing frequent raw material shortages which it was so far sourcing from other states, the company shut the refinery Dec 5.

While the company said it will re-start the refinery only after getting a sustainable supply of bauxite, anti-displacement activists say they do not want the plant or any mining in the region.

VAL is an associate company of the London-listed Vedanta Resources Plc.