New Delhi: Narendra Modi’s third successive victory in the Gujarat assembly polls is expected to pitch him for a more prominent role in the BJP, possibly as head of its campaign for the next general elections, while some party leaders even expressed their preference for him to be projected as the prime ministerial candidate.

Modi’s victory, almost on the same scale as in 2007 polls, came as a morale booster for the Bharatiya Janata Party (BJP) which lost the electoral battle in Himachal Pradesh.

Some party leaders said Modi should now be projected as the BJP’s prime ministerial candidate. 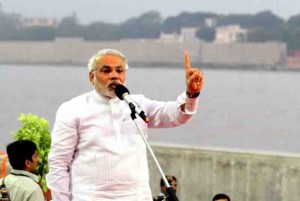 BJP MP Tarun Vijay said Modi “is the best suitable candidate” for the post of prime minister on the basis of his performance.

Another MP, Smriti Irani said that Modi would be her candidate for the country’s top post on the strength of his governance in Gujarat.

BJP sources now say Modi would be given a prominent role to galvanise the party rank and file for the next Lok Sabha elections.

“He is likely to be appointed chief of the party’s campaign for the 2014 Lok Sabha polls,” a party leader said on the condition of anonymity. The appointment could take place in January next year.

Modi’s victory has come at a crucial time for the BJP as it has to decide its next party chief over the coming few weeks. Nitin Gadkari, who has been party president since December 2009, has faced controversy over alleged financial wrongdoing by a company linked to him and there have been suggestions from some party leaders against giving him a second term.

The BJP had kept a final decision on its next president pending in anticipation of results of Gujarat and Himachal Pradesh and is now expected to take a call on the issue.

With Modi having emerged as one of BJP’s powerful leaders, his views are likely to matter on crucial issues facing the party.

Leader of Opposition in the Rajya Sabha Arun Jaitley said Modi was a very senior leader in the BJP and extremely popular with the party rank and file.

Senior journalist S. Nihal Singh said Modi was expected to win Gujarat and the question was how well he does. “After an impressive victory, at least a section will push for him to be prime ministerial candidate,” says Nihal Singh.

“I think he (Modi) is a very ambitious man. That is what he wants,” he said but added that it will increase complications within the BJP as there were other aspirants too for the post.

Nihal Singh added there were apprehensions about Modi’s “divisive persona whether 2002 or otherwise” and the BJP would have to take a call on how it will impact its prospects.

He said there was doubt about Muslims voting for Modi and the community vote can influence outcome on several seats in states such as Bihar and Uttar Pradesh.

“That is another problem for BJP.”

Janata Dal-United, an ally of the BJP, is not in favour of Modi being projected as a prime ministerial candidate.

BJP sources said the party was unlikely to project a prime ministerial candidate before the Lok Sabha polls but Modi’s expected appointment as chief of the campaign committee would send the right message to the party rank and file without upsetting any of the allies.

“We can tell the allies that a decision on prime ministerial candidate will be taken after the Lok Sabha elections,” said a party leader, requesting not to be named.

He said Modi’s appointment as campaign committee chief would make it a battle between him and Rahul Gandhi, who is heading Congress’s coordination committee for the next Lok Sabha polls.

Nisar-ul-Haq of Jamia Millia Islamia’s political science department, however, said that Modi was unlikely to be effective outside Gujarat and added he would not be projected as prime ministerial candidate.

“I don’t think he will be projected as prime ministerial candidate,” he said, adding that other leaders in the party, including Jaitley and Sushma Swaraj, also were contenders for the post, while party veteran L.K. Advani could also be in the reckoning.