Dharamsala: The Miss Tibet pageant, an event that helps the exiled community draw the attention of the world to the cause of Tibet, has moved out of Dharamsala, the home of Tibetan spiritual leader the Dalai Lama, say organisers.

Miss Tibet 2013, the 11th in the series, will be held in Bylakuppe, the largest settlement of the exiles in Karnataka, southern India, Feb 10-13 next year, the pageant’s director-producer Lobsang Wangyal told. 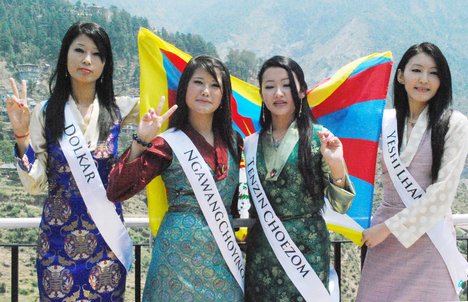 “Since a large number of Tibetans are settled across India and they are not able to witness the event (in Dharamsala), we have decided to take the event to other towns too,” Wangyal said.

“If we get a good response in Bylakuppe, we will move to other places like Dehradun (in Uttarakhand) and Gangtok in Sikkim before returning to Dharamsala,” he said.

This year’s pageant was cancelled by the organisers following the continuing wave of self-immolations in Tibet over China’s harsh measures and their demand for the Dalai Lama’s return home from exile.

“Some 90 Tibetans have self-immolated in protest against Chinese misrule in Tibet. We would like to dedicate the Miss Tibet pageant 2013 to those Tibetans,” he said.

Wangyal, 42, said the pageant, popular among Tibetan youth living in exile, was earlier held in June each year, but this time it will be held in February.

The forthcoming event will coincide with Losar, the first day of the Tibetan New Year, traditionally an event that sees massive celebrations among Tibetans.

The Miss Tibet contest started in 2002, amid mixed responses from the exiles.

Many, including the government-in-exile, opposed the pageant and held it to be against Tibetan tradition.

Despite that, the pageant has gained huge popularity among the exiled Tibetans.

Wangyal said the winners of the contest have represented Tibet internationally — twice winning Miss Earth in the Philippines and Miss Asia Pacific World once.

Wangyal said due to stiff pressure by the Chinese the Miss Asia Pacific World organisers had to change Yangkyi’s sash from Miss Tibet to Miss Swiss-Tibet.

Nineteen-year-old Yangkyi is a Swiss citizen.

In a similar incident, Chungtak withdrew from the Miss Tourism Pageant in Malaysia in 2007 after the Chinese government representatives pressured the organisers to enter her as Miss Tibet-China.

Even Dolma was asked to wear a Miss Tibet-China sash in the Philippines in 2008, but she refused. Eventually she was allowed to go ahead with the Miss Tibet sash.

The first Miss Tibet pageant was held in 2002. Only four women participated. In the 2003 and 2005 editions, only one contestant turned out each year and eventually got titles unopposed.

In 2011, the pageant saw the highest number of six participants.

Lobsang Sangay, the democratically elected leader of the Tibetan people in exile, however, supported the Miss Tibet pageant by saying “if composing songs, holding Miss Tibet contest and demonstrations are ways to achieve the goal (to draw international attention towards Tibet), I am all for them”.

“Once we have a Miss Tibet,” said Wangyal, “she can speak about the Tibetan situation in various international fora.”