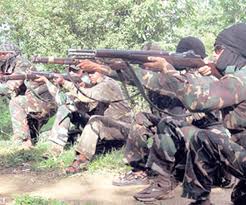 “It (Maoist terrorism) is definitely the largest threat in terms of task given to the CRPF (Central Reserve Police Force),” Sahay told reporters.

He said that the CRPF troopers are also geared up with all modern weapons and gadgets to curb the Maoist terrorism in India.

The CRPF director general arrived here Monday on a two-day state visit to review the para-military forces’ preparedness ahead of the Tripura assembly elections, due in February next year.

According to Sahay, of the total of 207 CRPF battalions, around 37 to 38 percent forces have been deployed in the Maoist affected areas of the country alone, followed by 33 percent in Jammu and Kashmir, 28 percent in the northeast region and remaining in various parts of the country.

“Our thrust area right now is in the Maoist area only,” said the CRPF chief.

Quoting from the union home ministry’s report, he said Tripura is the ‘model state’ in the country in the context of containment of four and a half decades old terrorism.

“In all circles, including the ministry of home affairs, Tripura has been referred to as the model state in terms of taming violent activities of the separatist outfits and there is no doubt about it.”

On Jammu and Kashmir, Sahay said: “The situation in Jammu and Kashmir is well contained but we are very much alert so that there are no problems in the future. Only two days back in Kashmir, we along with the Rashtriya Rifles and state police have killed three militants.”

He asserted that the para-military force is well-equipped and have the latest arms and technology to counter Maoist and other threat.

“In modernisation, we have procured very high degree of equipment especially with reference to the threat to Maoist areas. In fact, the CRPF uses the best weapons. We are much better than our adversaries,” Sahay added.

He said: “We also used unmanned aerial vehicles and observe the movement of unwanted people on the ground.”

“Our cadres have got expected skills. We don’t have problem.”