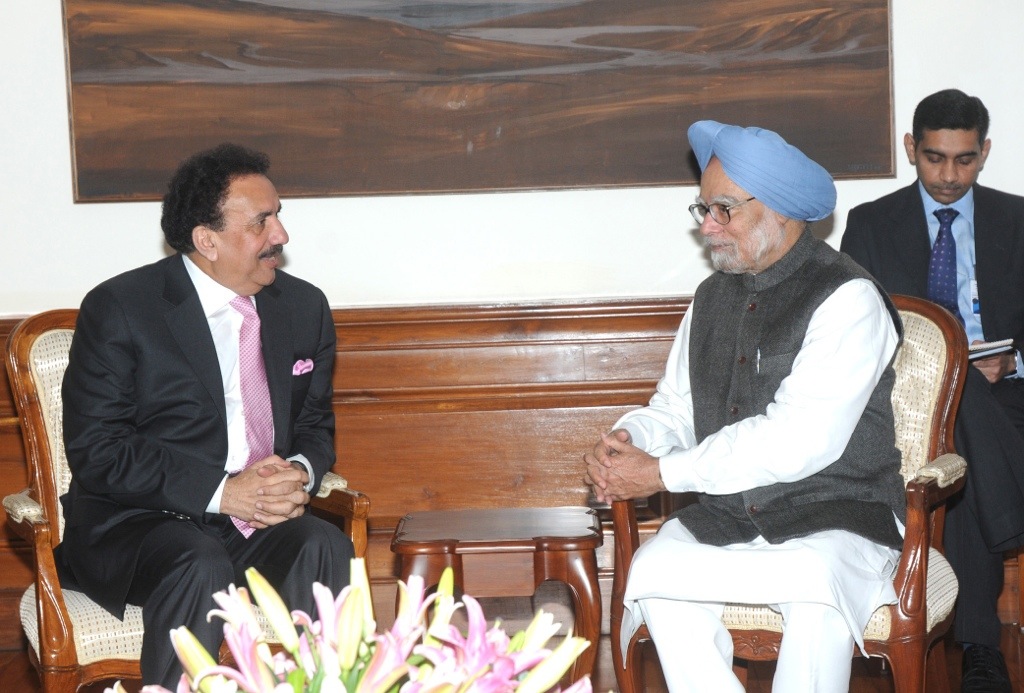 Before flying home Sunday after his three-day visit, Malik stoked fresh controversy by alleging that Indian non-state actors were also involved in the attack conspiracy and 26/11 accused Abu Jundal “worked as a source for (an) elite agency of India” and could have turned into a double agent.

Malik also insisted that Pakistan was in no way involved with the 2008 Mumbai terror that left 166 Indians and foreigners dead and plunged India-Pakistan ties to a new low.

He prayed at the shrine of the 14th century Sufi saint Hazrat Nizamuddin Auliya. “I prayed to Allah for a harmonious and peaceful relationships between both countries.”

Malik stuck a discordant note on the first day of his visit Friday with his purported comparison of Babri mosque demolition with the Mumbai attack. He later denied making a comparison.

He also clarified on his remarks pertaining to Kargil martyr Captain Saurabh Kalia and said he was prepared to get the information about his torture probed.

Malik did not get a concrete assurance from Prime Minister Manmohan Singh on the long-standing invitation to visit the neighbouring country. His meeting with the prime minister was short and described as “courtesy call” by officials.

The Pakistan minister admitted that there was perception in India about his country not doing enough to bring to book those responsible for Mumbai attack.

He said a proposed visit by Pakistan’s judicial commission to India to cross-examine 26/11 witnesses would help expedite the conviction of the seven accused arrested in Pakistan.

India can set the terms for the visit of the second judicial commission. “Once the procedure ends, we will be able to get conviction.”

But he stuck to his line about Saeed, who India wants deported.

At an interaction held here by the Observer Research Foundation, Malik said Pakistan was awaiting “substantial evidence” from New Delhi to act against Saeed.

Information provided by India was not sufficient as it relied on a statement of Ajmal Kasab, the Pakistani terrorist arrested in Mumbai and hanged last month, he said. “We need substantial evidence … still waiting for that.”

On India’s concern about cross-LOC infiltration, Malik said the Pakistan government had no hand in it.

Appearing conciliatory on concerns of Indian leaders on the Hindu minority in Pakistan, Malik said his government will take action against any case of forceful conversion of minorities.

He invited Bharatiya Janata Party leader Sushma Swaraj, whom he met Saturday, to visit Pakistan and see that there was “no mass migration” of Hindus from the country.

Dalbir Kaur, the sister of death row convict Sarabjit Singh, got an assurance from the minister that he will provide full assistance in the case related to her brother’s release.

In his interaction with National Security Advisor Shivshankar Menon, Malik discussed his assessment about terrorism in the region.

There was no joint statement by Malik and Home Minister Sushilkumar Shinde during the visit though the two sides discussed a gamut of issues including counter-terrorism, border management, fake Indian currency notes and cooperation among security and investigation agencies.

The Pakistani minister, however, said he had “very good interaction” with Indian leaders and was able to convey the message from Islamabad effectively. “Let us become brothers,” he said.

Security analyst G. Parthasarthy, however, said there were no deliverables from the visit and Malik lectured on issues such as Babri Masjid, Kargil and 26/11.

“All that India has got is egg on its face. I think inviting him merely to operationalise a visa agreement which had already been signed was a mistake,” said Parthasarthy.