When the going gets tough the tough gets going. The Congress led UPA II government does not ever seem to be away from the controversies and springs up a new one when all seems to be going well from a well crafted script.

The economist led government has been riding on the wave of its success in the wake of vote win for FDI in retail, in both the houses of parliament. Investor sentiment has been improving and citizens of the country were just beginning to hold their belief in the government’s policies when here comes along a new goof-up. 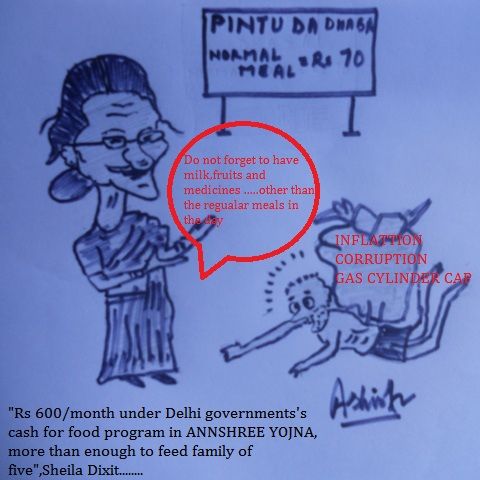 Under the new cash for food scheme, Dilli Annashree Yojna, Rs 600 per month is to be transferred directly to Aadhar-linked bank accounts of the senior most women member of the poor families.

All seemed perfectly well even though considering the cash-amount one doubts the economic acumen of the financial advisors to the government. What set the cat among the pigeons was the statement by Delhi chief minister, Sheila Dixit that Rs 600 was more than enough to feed a family of 5;  to buy dal, rice, wheat and be able to cook it to ensure their sustenance.

The statement is a sheer mockery of food inflation hit poor in the country and smacks of government arrogance.

The issue could have been handled with more care by articulating that the monetary amount was a start and it progressively go up, when the scheme takes hold. This would have gone down in a better way with the general public and the opposition.

Presence of UPA chairperson Sonia Gandhi on the dais during the inauguration ceremony made the matters worse.

The scheme is “too little too late” not just for the poor of Delhi but for the whole country as well to ensure food security for a family of five.

Such statements illustrate how far removed the ruling party is from ground realities.

It does not require rocket science to gauge what Rs 600 can buy in a month where a cup of tea costs Rs 4.

Last year, it was Planning Commission Deputy chairperson Montek Singh Ahluwalia, who went on record claiming that a daily income of Rs 32 per day in urban areas and Rs 26 in villages was more than enough to meet the food, health and education expenditures of the common man. The statement attracted wide criticism from the opposition and within the party, too.

The zero presumptive loss Kapil Sibal the IT and Telecommunications minister while defending the exchequer’s loss in 2G scam, still tickles many tummies, till date.

Runaway inflation is breeding discontent and unrest among the people. In this whole controversy the ‘common man’ needs to be redefined.

Any immature and irresponsible statement by our honorable politicians could only add fuel to the inferno. It is in the interest of leaders of political party’s to start thinking prudently and be very careful while speaking on public welfare matters, so as to maintain credibility of the leadership.