Kolkata: The charred remains of the annexe of the AMRI Hospital stands as a ghostly reminder of the fire that snuffed out 94 lives on Dec 9 last year. The families that lost their dear ones in the tragedy might have moved on, but the scars remain. 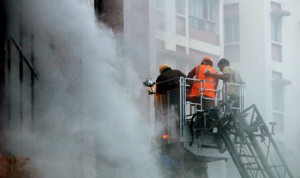 Sixteen people, including directors of the hospital, spent weeks behind bars worrying about their fate as the legal battle moved from one forum to another after the fire, in which mostly patients (some too infirm to move) were choked to death after inhaling toxic fumes.

Amid claims and counter-claims by counsel and the accused out on bail, there is a growing apprehension among victims’ families that the guilty might go scot-free.

“They (AMRI authorities) are influential people with money power. The matter is already a year-old and the media frenzy has died. As time flies by, public memory will go dim and the guilty may escape punishment,” Jayanta Bose, who lost his aunt in the fire, told IANS.

However, public prosecutor Rajdeep Mazumdar, who has been diligent in his pursuit to prosecute the offenders, exuded confidence of the guilty getting punished.

The West Bengal government, led by Chief Minister Mamata Banerjee, not only paid Rs.300,000 as compensation to the victims’ kin but also promised a job to a member of each family. But due to bureaucratic bottlenecks and legal hurdles, most of the intended beneficiaries are yet to get the jobs.

The compensation announced by the hospital had also been stayed after it was argued in court that the payments might influence the witnesses.

“The chief minister had promised a job but in spite of regular visits to various government offices, I’m yet to get any papers. The officials concerned have been ignoring us,” said Paritosh Das, who lost his brother in the disaster.

Many of the families had lost their sole bread winners in the fire and the only hope in sight was the job, but indifference of the government officials has left them in the lurch.

The victims’ families had formed The Human Health Right Forum (HHRF) – an association to fight for their rights – but the body is almost defunct now. However, some of the members are still eager to fight.

“I have heard that there are plans to reopen the hospital and use it for other commercial purposes. But I will not allow that to happen. I will fight tooth and nail against it and I’m sure others will join me too,” said Ranjan Dey, who lost his father to the toxic fumes.

A year after the disaster, the state government asserts that a system has been put in place to prevent recurrence of similar incidents, but there are some who doubt the claims.

“Most of the hospitals including the renowned ones have standardised their fire fighting facilities and are in a position to handle any fire-like calamity. The fire-fighting ability of our department has also been modernised,” Fire and Emergency Services Minister Javed Khan told IANS.

However, ventilation expert Amitabh Sur told IANS that none of the hospitals had facilities for smoke management. He said smoke dampers must be installed and proper evacuation facilities made to prevent an AMRI rerun.

“While basic fire-fighting equipments have been put in place, there are no facilities for smoke management. It was the toxic smoke that killed people at AMRI, not the fire,” said Sur of the Indian Society of Heating, Refrigerating and Air-Conditioning Engineers.

“Moreover, there is no mechanism to ensure that all fire-fighting equipment are functioning properly,” he said.

Despite the minister’s claims, the government-run SSKM Hospital in the city has seen three minor fires within a span of months, albeit without causing any loss of life.

“SSKM is a British-era hospital and the wiring has suffered wear and tear. Though there has been upgradation, short circuits have been causing the fires,” said Khan.

In the wake of repeated fires at SSKM, as a preventive measure, two fire engines are stationed at all government-run hospitals in the city from eight in the evening till the next morning.