Shimla: They’ve been captured on camera. Wildlife officials now want to tag satellite collars on the elusive and highly endangered snow leopard in the steep and rocky cliffs of Himachal Pradesh’s Spiti Valley, the country’s first collaring attempt on this wildcat species. 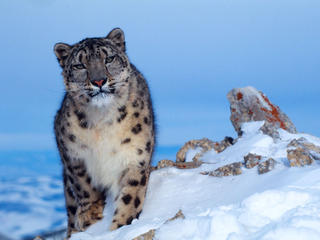 The officials say radio collaring will assist them in learning more about the habitat, range and behaviour of the snow leopards.

“Radio collars will help in understanding the behavioural patterns of the snow leopard and the reasons for man-animal conflict,” Chief Wildlife Warden S.B. Islam told.

The state’s wildlife department is already monitoring the snow leopards through cameras in the Spiti Valley, the state’s northernmost part which borders Tibet.

The department, in partnership with Mysore-based Nature Conservation Foundation, has installed 60 camera traps (automatic cameras) in the valley.

Islam said permission to install six radio collars was sought from the minister of environment and forests.

“This (collar installation) is part of the central government’s Snow Leopard Conservation Project which was launched in five trans-Himalayan states, including Himachal, in January 2009,” he said, adding, “This will be the first collaring effort in the country”.

Wildlife wing studies show the presence of seven to eight snow leopards per 100 square km in the Spiti Valley.

The presence of a sizable population of prey species like the Asiatic ibex – a wild goat species – the Himalayan blue sheep and the wolf indicates the valley supports a good population of the wildcats.

The snow leopard, a graceful golden-eyed animal with thick fur, padded paws and a long tail, is found in rocky regions at an altitude of 2,700 to 6,000 metres.

Apart from the Spiti Valley, the state’s Pin Valley National Park, the Kibber Wildlife Sanctuary, the Great Himalayan National Park and the Pangi and Bharmour areas of Chamba district have a sizeable population of the snow leopard.

Wildlife officials said the satellite collars would help to know more about its behaviour, reasons for attacking domestic animals and coming closer to human habitations and its natural prey base.

“If we get the permission, the collars would be installed after the mating season (mid-March),” said Davinder Chauhan, a wildlife official working on snow leopard conservation in the Spiti Valley.

He said the collars would also help tracking the pregnant leopards to solitary den sites in rocky slopes.

“The findings on its range of habitat would be important for snow leopard conservation,” Chauhan added.

He said the camera trappers enabled the wildlife wing to identify the spots that were frequented by the snow leopards.

One of the cameras captured shots of a pack of dogs attacking a snow leopard.

According to wildlife experts, the rise in the population of abandoned dogs might pose a threat to the snow leopards and their food chain.

“The dogs usually attack in a pack and it’s easy for them to hunt even big mammals like the Himalayan blue sheep. This might reduce the prey base of the wild cat,” an expert said.

The snow leopard is a globally endangered species. Rough estimates place its global population at around 7,500.