Ahmedabad/Shimla: The score was one all in the crucial battle for political stakes Thursday with the Bharatiya Janata Party’s (BJP) Narendra Modi poised for a hat-trick of wins in Gujarat and the Congress wresting power in Himachal Pradesh. 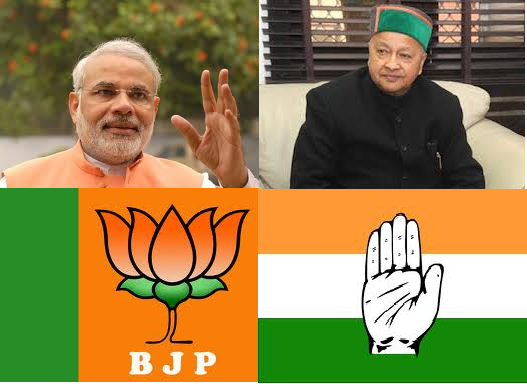 In Gujarat, the BJP was headed for a win in 116 seats, just short of the 117 it won in 2007. The Congress appeared to have improved its tally marginally from 59 last time to 60 this time.

In the hill state of Himachal Pradesh, the BJP’s Prem Kumar Dhumal government prepared to exit office for the Congress that was poised to comfortably win 36 seats in the 68-member assembly.

One all perhaps, but it was not really even stevens, in public perception at least. The win in Gujarat, which sends 26 MPs to the Lok Sabha against Himachal Pradesh’s four, dominated the political space.

The drums rolled outside the BJP office in Ahmedabad as the trends came in and Modi prepared for a third straight term as chief minister, with speculation mounting over whether he would be the BJP’s man for prime minister in 2014.

Modi, who has ruled Gujarat since 2001, did not immediately come out to address his jubilant supporters.

But even before the results were clear, he sent out a message on Twitter: “No need of looking behind, FORWARD! We want infinite energy, infinite courage, infinite patience…”

Triumphant at the important win, BJP leaders were exultant but fought shy of responding to that most asked question.

“(The Gujarat election) is not about PM candidate but about who wins in Gujarat,” BJP leader Balbir Punj said. “Let us savour this moment.”

However, Rajya Sabha MP Smriti Irani said frankly that Modi, 62, would be her candidate for the country’s top post on the strength of his governance in Gujarat.

Terming it a spectacular victory, Seshadri Chari of the Rashtriya Swayamsewak Sangh (RSS) echoed that view. “This election is not to elect a PM candidate.

“We had expected the number to cross 125 but still we are very happy,” Chari said.

The Congress, which in complete contrast to the BJP, had put forward no one leader as its chief ministerial candidate and had in fact consciously steered clear of bringing up the minority polarisation in the state, took solace in the margin of wins.

The BJP win, he said, was expected. “The government there, the bureaucracy there has a stranglehold over the system. That is the general perception. It is important that the kind of sweeping victory that was predicted is not there. The fact is that the BJP has been contained below the number it had last time,” he told a television reporter.

“We are a democracy, it can’t be I, me and mine,” the minister said, in a reference to Modi’s style of governance.

The Congress welcomed the “thumping victory” in Himachal Pradesh.

“We are very confident of forming a government,” Congress veteran and former chief minister Virbhadra Singh said jubilantly as celebrations went on outside the party headquarters in Shimla with supporters bursting firecrackers.

Dhumal, in his home constituency Hamirpur, accepted defeat and congratulated the Congress.

BJP’s Rajya Sabha MP Chandan Mitra added that the Congress had “won fair and square” in Himachal and the BJP would have to think where its strategy failed.