New Delhi: The number 786, revered in Islamic culture, has found prominence in Bollywood over and over again — remember Amitabh Bachchan’s ‘billa No.786’ in “Coolie” and Shah Rukh Khan’s ‘qaidi No.786’ in “Veer-Zaara”. It returns to the screen with Akshay Kumar’s “Khiladi 786”. 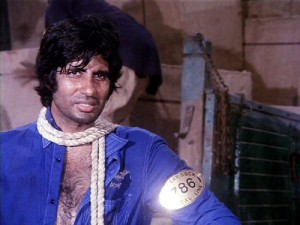 The number is said to be the total value of the letters ‘Bismillah al-Rahman al-Rahim’ (in the name of Allah, the compassionate, the merciful), according to one Arabic system of numerology. In Bollywood, quick to pick on what strikes an emotive note with superstitious viewers, 786 has been used either as a connotation for a character’s invincibility or to denote how a truly god-blessed soul overcomes tough times.

In reality, however, the number is just a “ritualistic reference”; no more than that, says Firoz Bakht Ahmed, teacher and community worker.

“There is no doubt this number, 786, remains a holy number in the subcontinent, but it started as a trend. And now it has common acceptance.

“It is not some kind of force to reckon with. It just has a face value and has a ritualistic reference to it, just like there is an Om, a Trishul and a Swastika… it is no more than that,” Ahmed, a grandnephew of Maulana Abul Kalam Azad, told.

“It is just indicative of a belief. Like Sikhs say ‘Wahe guru’ to save themselves from evil, many people use 786 for the same reason. It doesn’t mean it is god in itself and nothing can happen to you,” he explained.

But for Bollywood filmmakers, still enough to forge that emotional connect.

In the 1975 film “Deewaar”, Amitabh Bachchan’s character Vijay Verma carried a ‘786’ billa with him in his pocket all the time. In the 1983 film “Coolie”, the magic carried through and the megastar’s character Iqbal Khan sported ‘billa no. 786’ on his uniform.

Obviously, the number’s mystical powers were woven into the story.

“786 – in ‘Deewaar’, the 786 billa in his coat pocket saved him when he was shot at… when it dropped out in the climax, he was shot and died. In the ‘Coolie’ climax, the ‘chaadar’ draped over his body though shot at, saved him,” Big B had once shared with his fans on Twitter.

In a transference from the reel to the real, many fans believed that it was 786 that saved Amitabh from his near-fatal accident on the sets of “Coolie”. Thereafter, the number gained immense popularity in the country.

Film historian SMM Ausaja notes: “The number gained popularity after its intelligent use in Yash Chopra’s ‘Deewaar’, and subsequently it attained a cult status in the socio-cultural fads. In fact, eight years later in 1983, the number re-emerged in ‘Coolie’ – a film which completed a mind-boggling 75-week run across major metros.”

“Amitabh sported this number on his badge. Even the logo of the film had this number in one ‘O’ of Coolie. We also saw a pacemaker with this number in Ketan Desai’s ‘Allah Rakha’ (1986). Not just car number plates, even mobile phone numbers bearing these digits are charged a premium by the operators,” he added.

There are other examples too.

Chiranjeevi sported the number in the Telugu film “Khaidi No.786”, while Shah Rukh’s character Veer Pratap Singh in “Veer-Zaara” also bore the prisoner number 786. The registration number of Ajay Devgn’s car in the movie “Once Upon A Time In Mumbaai” was MRH 786.

The tradition continues with the upcoming “Khiladi 786”, in which action star Akshay Kumar apparently has ‘786’ etched on the destiny line of his palm.

“It denotes that Akshay’s character Bahattar Singh has ‘Allah ki rahmat’ (Allah’s blessings) and how when he gets bruised, there is some upheaval all around. There is only an undertone of the number in the film, it has not been exaggerated,” Rakesh Upadhyay, the film’s creative producer, told.

Do filmmakers use it as a matter of superstition?

“It is not a superstition, it’s an auspicious number in the Islamic context; therefore when you have a Muslim character, associating this number with any scene or incident enhances its impact,” said Ausaja.