Washington: The surprise decision of a Republican senator to quit and become the next head of conservative think tank Heritage Foundation has focused attention on South Carolina’s Indian American governor Nikki Haley. 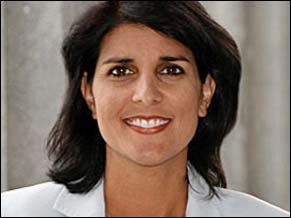 For under the state law the first-term governor will not only appoint senator Jim DeMint’s successor, she’ll set off dominoes that will reshape the next two years in state politics, culminating with two US Senate elections and her own potential re-election bid, according to Politico, a politics focused media site.

The driving question is whether Haley selects a caretaker for the seat who would agree not to run for the full six-year term in 2014 – or taps an ally that would help cement her legacy, it wondered.

A spokesman for the governor declined to speculate on a timeline for the decision, but DeMint’s resignation will take effect before the next Congress convenes Jan 3, leaving a little more than three weeks for a decision.

House member Tim Scott is seen as the leading contender for the appointment among Republican consultants and officials, largely because the 47-year-old African-American would provide diversity and geographic balance, the site said.

But in-state operatives cited by the Politico cautioned that the fastest way to lose the independent-minded Haley is to try to force her hand.

“Nikki Haley marches to the beat of her own drummer,” Joel Sawyer, a Columbia-based Republican consultant and former executive director of the state party, was quoted as saying.

If Haley was looking for a political escape hatch, she could appoint herself, Politico suggested. A new poll by Winthrop University of all adults pegged her job-approval rating at just 38 percent – a full 10 points behind President Barack Obama.

But Haley quickly quashed that possibility in a radio interview Thursday afternoon, saying, “No, I will not be appointing myself. That’s not even an option.”