New Delhi: After breaking box-office records with “Dabangg”, actor Salman Khan is ready to entertain audiences in his popular avatar of Chulbul Pandey in “Dabangg 2”, which releases this Friday. 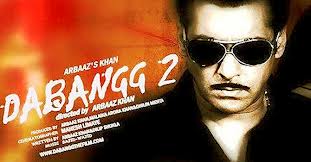 “Dabangg” was set in a village and had the rustic, rural flavour of Uttar Pradesh. The story this time around will shift to a posh metropolitan city.

The sequel will see Chulbul Pandey to be transferred to a city, where he will mingle with the elite, but will retain his simplistic flavour and values. “Dabangg” having been a blockbuster, the buzz around the sequel is high too.

The original movie was directed by Abhinav Kashyap, but he opted out of the sequel due to some issues, following which Salman’s brother and producer Arbaaz Khan jumped in as the director.

Made under the banner of Arbaaz Khan Productions, “Dabangg 2” has been written by Dilip Shukla. This will be Arbaaz’s first film as a director.

The film will see Salman and Sonakshi Sinha again reprising their roles of Chulbul Pandey and Rajjo, while Vinod Khanna will feature as Prajapati Pandey, and Arbaaz as Makhanchan Pandey.

“Dabangg” proved to a turning point of actor Sonu Sood’s career, who played the main antagonist Chhedi Singh. Initially he was a part of the sequel too, but had to opt out because of date issues.

Now, Prakash Raj has been roped in to play the antagonist. Made at a budget of approximately Rs.50 crore, the film is likely to release in over 3,000 screens.

Since the release of “Dabangg” in 2010, the movie and Chulbul Pandey have become a brand. Whether the sequel will be able to create the same magic as “Dabangg” remains to be seen.

After the release of Shah Rukh Khan’s “Jab Tak Hai Jaan” and Aamir Khan’s “Talaash”, both of which earned big bucks at the box-office, it would be interesting to see how “Dabangg 2” does at the box-office and which Khan takes the top slot.