Halifax : The waterfront here is a beautiful and popular area with both locals and tourists alike. It is actually a basin of the Atlantic Ocean, where in the days of yore a number of large ships used to come in. Now of course they do not come here, but the locals have their yachts and boats on the bay, where anglers also try their hand on the fish. 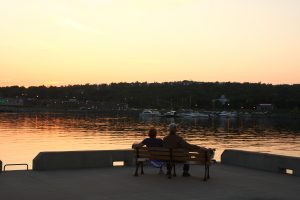 Locals recollect that some time back a baby seal had made the bay its home and was popular with the people who would come and watch it play about in the water, with its large eyes watching the people curiously. But much to the chagrin of the anglers it had caught the habit of stealing the fish that they had hooked and as such was not very popular with them.

Locals also use the area to walk their dogs but boards announce that they have to be firmly on the leash at all times so that they do not bother the tourists. But what is interesting is, and something that the authorities back home could take note of is that there is a container, which has small plastic bags and should the dogs ease themselves, it has to be picked up in the plastic bag and put in a garbage can.

The place also has a large anchor and plaques recalling the contribution of the merchant marines in the development of the region and how the area was developed and dedicated to the people. Reports are that a ship building complex is likely to come up in its immediate vicinity, which will be building something like 25 to 30 ships in a year and also give an impetus to the job opportunities in the area.

But what strikes a visitor is the manner in which it has been maintained. There is no garbage or litter to be seen and there is brick walk all along the water front, which is used for going around the bay. Neat houses are lined up on one side and one of the owners had a Santa Claus on the window waving a small light as to tell the ships that they were approaching land.