Kotgarh (Shimla Hills): The British are said to have set foot in Kot-guru (as it was known then) the first time around 1813. A small cantonment is believed to have been set up around the site of the present Mission school. The officers posted here felt the need for a school in the area and the Gorton Mission School became operational in 1842. In 1846-47 the Kotgarh church was built.

That is a 165 years ago. There is reason to believe that Christmas has been celebrated here ever since, largely due to the small Christian community, whose members seem to have kept alive a carol singing tradition including hymns in pahari that perhaps are unknown elsewhere. 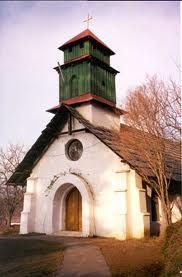 Presently an ancient church bell pealed, rather faintly and briefly, gently hailing the faithful to prayer, most of whom were within earshot already. In the old, road less days, this considerable bell had been carried on human back and installed high up over the church entrance with much engineering innovation.

It was ‘Bara Din’, 2012 as a bright Sun shone over the Kotgarh hills. Snow, the universal symbol of Christmas could only be seen on nearby Hatu peak and the distant Himalayan range to the north.

The Kotgarh church, a small sized timber, mud and slate structure quickly filled with people, the first comers warmly seated around the two big bukharis that heated the hall.

The service kicked off with Christmas greetings from the padre followed by a popular hymn heralding the birth of Christ, to the beat of bongos and the strains of a harmonium and sung with much gusto and shuffling of the feet (partly to keep them warm).

As the service progressed, more people, the devout or the guilty or the doubtful one could not say, poured in. Plastic chairs were placed along the aisles to make more seating room. A prayer; another hymn and louder singing followed.

A highlight of the service was the rendition of some old and forgotten pahari hymns by some of the older members, accompanied by rhythmic clapping by younger people. A particularly old favourite number prompted a lady to walk up to the altar and break into pahari nati (the local folk dance) much to the merriment of the congregation.

At the end of this song and dance performance, the lady grabbed the mike and movingly reminisced about how in days bygone they would sing and dance at Christmas! But times had changed.

This ‘outburst’ apparently inspired the padre to launch into an extended sermon, after listening to which for some time, people were seen rubbing their feet and thighs and hands, as the cold seeped in, quicker than the exalted message from the pulpit. The regulars were trying to pay attention. The teenagers whispered into each other’s ears and giggled. The impatient moved out into the warm sunshine.

The children were already outside, eagerly waiting for Santa Claus to appear with his sack of presents. But that had to wait. The pastor’s dutiful wife had worked with local kids to enact a short The Nativity drama. Some older kids, dressed as angels and Joseph and Mary trooped out of the parsonage and into the church. As the play re-played perhaps over a hundredth time in this church, all present enthusiastically joined in to lustily sing “Na jhoola, na khatola; Apna syr rakhne ko…..”, the all time Nativity favourite.

Parents and relatives of the dramatis personae were pleased and grinned and feverishly took pictures of their wards and of each other and together, posing in front of the altar or with the coloured glass window depicting the Crucifixion of Christ (ironic for this day) as background.

Santa eventually appeared with a white thinly bearded mask, too small for her face and looking rather scary, but the children were jubilant and gleefully eyed Santa’s sack which they knew held a Christmas present for each one.

The service over, people moved out, first to find their cold footwear to ‘warm’ their frozen feet and later to greet each other with “Merry Christmas, Merry Christmas”! The older, many with walking sticks and stiff knees slowly wobbled to the lawn where a hot Christmas lunch was arranged.

Children shrieked and excitedly ran all over trying out their new toys. The few young, there aren’t many left in Kotgarh hills, were soon busy serving food to others.

With the afternoon Sun still shining brightly and with lunch inside, people relaxed and generally chatted. A new government was being sworn-in in Shimla today and the more politically inclined keenly commented on expectations over the next five years.

Only there weren’t many listeners and the few old timers who took government seriously, knew that like the new Chief Minister, their last election had already taken place.

A round of tea and the congregation began to disperse. Some had far to go and others had left behind pressing problems and household chores. Kids wanted to go home too and pulled at their mothers’ dresses.

Those who had walked looked for lifts in cars going their way. Quick good-byes and short embraces and uttering Merry Christmas again, stopping to “Thank You” the Padre and his wife; another Christmas at Kotgarh was over.

Another notch in the long timeline of Christmas celebrations at Kotgarh had been etched.