Dehradun : While bird watchers in Uttarakhand are delighted, but even conservationists in the United Kingdoms have something to cheer about.

The yellowhammer, a bird which was once very common in the UK, but its species fell by 54 per cent between 1970 and 2003, bringing it on the red list, was spotted recently in Dhanulti, in the outskirts of Mussoorie. 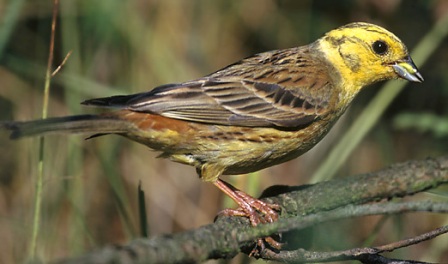 An NGO, Action for Research and Conservation in Himalayas (ARCH) had recently organised a great Himalayan bird count in 72 regions of the Garhwal Himalayas.

Over 250 bird watchers, from different parts of the country, who had split themselves into 21 groups participated in the bird count. Their greatest find was the yellowhammer in Dhanaulti.

Bird watchers claim that they saw the bird in the Nali forest near Dhanaulti, a picturesque hamlet, off Mussoorie, which of late has become much in demand by tourists during the peak summer months. ARCH claims that this is the first time that the bird has been sighted in the Uttarakhand region.

The male of the species are unmistakable with a light yellow head and underparts, brown back streaked with black and chestnut rump. In flight it shows white outer tail feathers.

Found across the UK, they are the least abundant in the north and west, it is absent from some upland areas, such as the Highlands of Scotland, as well as some lowland areas as Orkneys.

According to ARCH chief, Prateek Panwar, the yellowhammer was sighted by Harshit Singh, a bird watcher from Ghaziabad who had come specially for the count.

“In Uttarakhand we do not have the yellowhammer recorded in the bird record of this small mountain state and we will now give proof to the state forest department so that it can be recorded in the list of birds”, said Panwar.

He said that the female yellowhammer is duller in colour and it is a matter of joy that the bird has been sighted for the first time in Uttarakhand, as its numbers are going down fast in the UK.

Another rare bird that was sighted during the bird count is the red kite, which is medium large bird of prey, but very beautiful to see, he claimed.