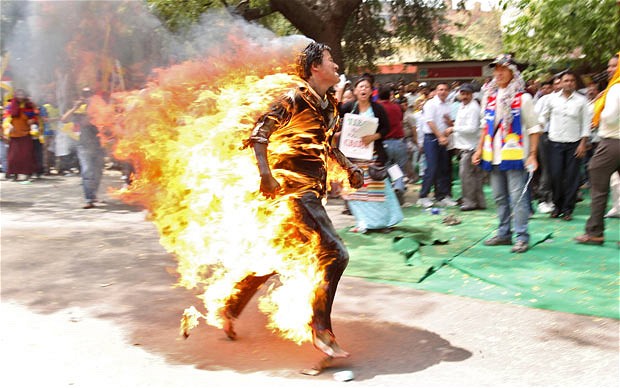 It says something about the world that we live in that six people set themselves on fire in just about as many days to protest their diminishing freedoms and it barely captures any attention at all.

Seven Tibetans committed self-immolations this week, bringing the total since 2009 to 69 of which 56 have been terminal, according to information maintained by the Central Tibetan Administration (CTA) in McLeod Ganj in Himachal Pradesh. The fact that 55 self-immolations have taken place since January this year alone begins to paint a macabre picture of mounting despair and anger in many parts of Tibet.
A common thread running through these self-immolations has been the demand for equality, cultural and religious freedom and the return of the Dalai Lama to his homeland since he was forced into exile in India in 1959 in the aftermath of a Chinese takeover.

It is not clear whether the spike in self-immolations this week has anything to do with the decennial conference of the Communist Party Congress that began yesterday in Beijing. It is during this congress that party elders will effect a change of leadership. Some 2000 specially chosen delegates are meeting in the Great Hall of the People to ensure a smooth transition of power from President Hu Jintao as the party chief to Vice President Xi Jinping.

Reports out of China, as controlled and filtered they are, suggest widespread disaffection against corruption in public life as well as growing social and economic inequities. The issue of Tibet’s restiveness, which is generally ignored by the Communist establishment, has to compete with other societal conflicts, making it even more marginal than it has already become.

Beijing’s official line has been to describe the self-immolations as part of a conspiracy orchestrated by the Dalai Lama and his “clique”, even though there is no evidence whatsoever to indicate the exiled Tibetan leader’s involvement.

On the contrary, even if he had that kind of power and access to ignite such acts the Dalai Lama has everything to lose by doing so because it is in direct conflict with the central feature of his global credibility- a steadfast adherence to non-violence and compassion.

The Chinese government is very conscious that self-immolations coinciding with the Party Congress create a powerful symbol of violent disharmony, something that it has always been uncomfortable about.

The CTA has reported widespread protests involving thousands of Tibetans in Malho prefecture in northeast Tibet after a young man died on Thursday following self-immolation. He was demanding that the Dalai Lama be allowed to return. In another incident hundreds of Tibetan students gathered to protest in Dowa township in Rebgong after a 23-year-old herder self-immolated and died on Wednesday, the CTA reported.

“Chinese leaders selected during the 18th Party Congress must recognise that China’s hardline policies in Tibet have utterly failed and only through dialogue can a peaceful and lasting solution be found. We firmly believe that an end to repression will effectively end the cycle of self-immolation,” Tibetan Prime Minister-in-exile Lobsang Sangay, who is also the political successor to the Dalai Lama, was quoted as saying.

Separately, the CTA said, “The reasons for the self-immolations are self-evident: political repression, economic marginalisation, environmental destruction, and cultural assimilation.”

Sangay’s mention of the 18th Party Congress is significant because in the politically heightened atmosphere in Beijing to select a new leadership Tibet is unlikely to figure otherwise. Tragically, but for the self-immolations by ordinary Tibetans with no political influence there is next to no chance of any attention coming their way.

On a related note, the re-election of Barack Obama as the US president is unlikely to change the dynamics in any way, particularly because Washington’s preoccupations with Beijing are necessarily of economic nature such as currency manipulation.

President Obama is unlikely to pay any substantive attention to Tibet during his second term at a time when domestically he is under great pressure to deliver on the economic front. Connected to the larger US strategy in the region divorced from Tibet, is Obama’s upcoming visit to Burma barely within two weeks of returning to office. China will watch it with great interest and some discomfort.

While the stated goal of the visit is to “speak to civil society to encourage Burma’s ongoing democratic transition”, according to the White House, it would not be lost on anyone that its subtler aim is also to make US presence felt close to China. It is in this larger context that the Obama administration is unlikely to pay much attention to Tibet other than making some polite noises about human rights there.