Dehradun : In an incident that should make the Uttarakhand government in general and the health department in particular hang down its head in shame and embarrassment, a patient died in the isolation ward, and his death came to light only some days later, when the body started emitting a foul smell.

Strange it may sound, but an unknown person with no attendants or address, was admitted to the isolation ward of the SPS Government Hospital in the holy city of Rishikesh, along the banks of the Ganga in Uttarakhand. 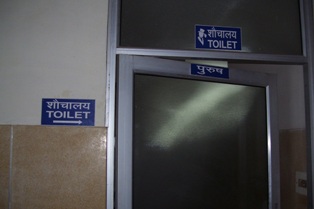 The person probably died when he had gone to the toilet, but neither the doctor attending on him, nor the sweepers who are supposed to clean the toilet every day, came to know of the death.

It was only yesterday morning, when the patients gathered outside the pathology department of the hospital complained of a foul smell that the Hospital authorities became active.

However, when the patients found the smell too offensive the authorities looked into it and found that the source of the smell was the isolation ward.

The ward was opened and in the toilet was found the decaying body of the unidentified man who had been admitted some days back.

The police, who were called has taken the body into its custody and sent it for post mortem.

Even as the Hospital authorities were later trying to brush the matter under the carpet, it was gathered that a 108 ambulance had brought the unidentified man to the hospital about four days back and he was admitted to the hospital.

The authorities are now finding it hard to explain, why the doctor attending the man, if at all he was, had not reported him missing.

It has also given rise to a question whether no doctor attends to an unidentified man in the hospital, regardless of his condition, then why is he admitted at all?

And above all the sweepers are supposed to clean the toilets of all the wards of the hospital every day to ensure that they are clean.

How come they did not see the body of the man in the toilet for the three or four days that it lay there decaying?