Dehra Dun: The weather has taken a turn for the worse as the mercury hovers below the 0 degrees C mark in the higher reaches of the state. The four major shrines of Uttarakhand – Badrinath, Kedarnath, Yamnotri and Gangotri – all located at an altitude of over 3500 metres have closed down for the winters.

The shopkeepers and dhaba owners, plus the few hoteliers who do brisk business during the peak pilgrim season have also closed shop. Having raked in the moolah, they now look forward to the next season, when pilgrims and tourists will come again in large numbers. 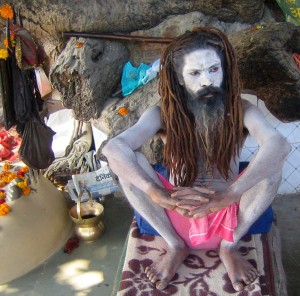 But regardless of the temperatures and complete barren landscape, when even the snow leopard and musk deer move down to heights where they can find some food, but even under these isolate conditions there are quite a few hermits and sages who have preferred to stay back in their caves in the mountains and continue with their prayers and meditation.

They do not reveal what they have stocked for the six months that they will be in complete isolation, cut off from the rest of the world. Whether they will be cooking for themselves or have they reached a stage, where food is not a necessity and being engrossed in prayer meditation is all what the body and soul require.

Sitting in front of his ‘dhuni’ a small fire that emits more some than perhaps heat and light, a hermit sitting in his cave when told that meditation and prayer may while away the time, but what about the minus zero temperatures and howling winds, how would he survive them.

“It is all in the mind, and as far as the body goes you can attune it to any levels of tolerance that you want. Have you not seen the extents which people have gone to attune to their bodies into doing the abnormal? And this is ordinary men, we hermits with control of mind and breath can take it into much deeper realms”, he claimed.

He cited a number of hermits, over two dozen of them who are fanned out in the caves in the mountains above the four religious shrines of Uttarakhand and who would be spending their winter months engrossed in prayer and meditation and have been doing so for the last 25 to 20 years without bothering to go down to the plains.