New Delhi: Rabindranath Tagore entered the world of visual imagery, drifting from words to images, only when he turned 64.

The winner of the Nobel Prize for Literature in 1913 went on to become one of the earliest master painters in India, with his drawings of human figures and nature. 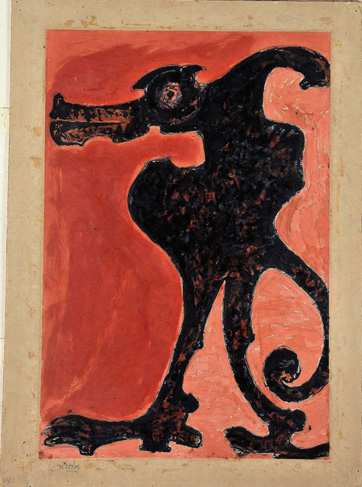 “The last Harvest: Sesquicentennial Exhibition of Paintings by Tagore,” a collection of nearly 100 paintings that has already travelled the world as part of the 150th birth anniversary celebrations of the sage (his birthday was on May 8, 1861), has now dropped anchor in India at the National Gallery of Modern Art (NGMA) in the capital.

The exhibition, which opened Monday, will continue for a month in New Delhi, before touring other cities in the country. Director of the NGMA Rajeev Lochan said: “We will take it to Mumbai, Bangalore, Hyderabad and Bhopal.”

He added that the paintings had already travelled to nine museums in three continents.

The exhibition was curated in chronological order, under four categories in keeping with the progression of Tagore as a painter of curious natural creatures and creator of layered landscapes, mysterious figures, self-portraits, narratives and head portraits, inspired by Cubism.

But even as a writer, Tagore was a frequent doodler. Instead of scratching out errors, he drew forms around them so that the overwriting and scratching took on separate lives on hand-written pages.

Out of this doodling emerged a strange set of drawings, mostly geometric forms from his early days as a painter. The drawings throw light on the poet-turned-artist’s struggle to master form and lines in the first section, “shapes”.

That makes way to a section on “animal and nature” in which the poet paints fantastic imaginary beasts, many of them blending aspects of man, reptile, bird and amphibian creatures. While some images resemble the ‘gharial’ (small alligators) found in eastern India, wolves, bovine or feline shapes, all make a presence. All these creatures peer out with knowing, gnome-like eyes.

In his writings, the poet says: “In human society, we sometimes encounter various animals that live hidden within us”.

The hybrid animals speak of Tagore’s obsession with abstract forms and inner psyches.

The mediums are as simple as the pen, coloured ink, water colour and charcoal on paper.

Large gloomy black spaces dominate his silent landscapes, which are hazy in their contours and illuminated by sudden sources of light.

The same meditative quality spills into his figures of women and portraits of faces that are oval in shape and darkly mysterious.

Tagore was untrained as an artist, and he sometimes referred to his paintings as his “foundlings”, with an almost paternal pride.

He said, “paintings made me more observant and visible to the world”.

Tagore said he tried to free his paintings from his literary imagination and from his own identity.

He wanted viewers to appreciate paintings in the light of their own experience and sensitivity.

Tagore regretted that he could not devote more time to art.

“I am hopelessly entangled in the spell that the lines have cast around me… If I were a free agent, unburdened by any care, I would live by the Padma and gather a harvest of pictures,” he wrote to a friend in 1928, when he had begun to paint.

Curated by R. Sivakumar, the art works have been acquired from prestigious collections at the Rabindra Bhavan, Kala Bhavan, Shantiniketan and from the National Gallery of Modern Art.

Tagore drew more than 4,000 pictures during his lifetime.