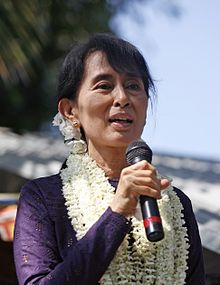 Before flying back to Bangalore, the Nobel laureate said she was going back with the love and affection of the people of the district.

Evincing keen interest in the activities of self-help groups, she asked the women questions about their income, savings and living conditions.

The Myanmar leader was hosted by Muddamma, a member of the self-help group at her small house in the village. The 40-year-old woman explained to the visiting dignitary how she used the loans provided by the government to rear two cows and how the income has helped her strengthen the family’s financial position.

Impressed with her success story, Suu Kyi wanted to know if she would like to migrate to the city or prefer to stay in the village.

“Do you want women to work after you marry them,” she asked some youth present there. “You should remember that women are equal to men,” she said.

The union minister, the chief minister and officials briefed her about the functioning of the self-help groups and pointed out how Andhra Pradesh is leading the movement in the country.

Earlier, at Govindapuram village Suu Kyi interacted with people working under the MGREGS. She wanted to know how they were paid the wages and how the scheme is helping them to improve their living conditions. She also met a farmer and heard his story of struggle.

Suu Kyi along with her aides, Jairam Ramesh and the chief minister reached Kothulagutta village in three helicopters from Bangalore.

The villagers and local officials accorded a traditional welcome to Suu Kyi, who also saw a power point presentation on rural development in the state and the impact of the welfare schemes being implemented by the central and state governments.

She later reached Govindapuram in a special bus and drove to Pasanipalli village.