Dehradun : Ever since late Prime Minister Indira Gandhi opted for The Doon School, for her two sons, Rajiv and Sanjay, albeit at the behest of her father, Pt Jawahar Lal Nehru, it appears that the school has become a favourite with the family. 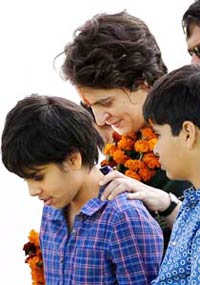 Now Rajiv Gandhi’s daughter, Priyanka was in town and spent over half an hour closeted with the headmaster, Peter Maclaughlin, seeking details for the admission of her son Rehan Vadra, who is likely to come here next year from class VII, provided the formalities for his admission are cleared.

The visit of Priyanka was kept a closely guarded secret as even the district authorities were not informed about her coming here, though the concerned people at The Doon School had been informed, but they kept it within themselves, not even letting other staff members know.

Perhaps even the school authorities did now want the word to spread about her arrival for her son’s admission, as the process has to be followed, that is give an admission test, before any boy can be admitted into the school.

It may be mentioned here that despite Pt Jawahar Lal Nehru being the Prime Minister of the country, and that too the first head of the government of free India, the then school headmaster, Mr Martyn refused direct admission to Rajiv and Sanjay, and they had to go through the test procedure.

Incidentally. Priyanka’s father Rajiv Gandhi and uncle Sanjay Gandhi were also students at the school, which, along with its reputation of being the best boarding school in the country, could be the reason for her seeking admission for her son here.

Though the school authorities confirmed that Priyanka had in fact come to the school and met the headmaster, but they were generally tight-lipped about what transpired between the two, as it is said that it was a one-to-one meeting.

Meanwhile reports in the city were, that after her meeting with the headmaster, Priynka left for Barlowganj in the nearby ‘queen of hills’, Mussoorie, where she went to another school of repute, St George’s College. However, the College authorities refused to confirm or deny the visit.