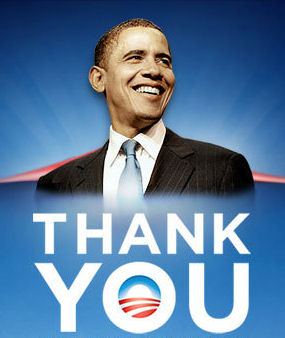 Washington: Barack Obama has been re-elected as US president, winning 274 electoral votes, four more than what was needed to win. It was a close contest in which he defeated Republican challenger Mitt Romney.

“We’re all in this together. That’s how we campaigned, and that’s who we are. Thank you,” said another tweet.

Barack Obama clinched a second term as US president, defeating his Republican challenger Mitt Romney in a tough fight that went down to the wire.

The glad tidings for Obama came around 11.15 p.m. when major networks gave him 290 electoral votes to take him over the threshold of 270 required to win. Romney was reported as getting 203 electoral votes.

Four years ago, Obama was elected as the US’ first African American president and he has now become the third consecutive president to retain office after George Bush and Bill Clinton.

Even pro-Republican Fox News conceded Obama’s win as he bagged the first big contested prize of the night in Pennsylvania followed by New Hampshire, where Romney has a home and began his campaign, and Iowa.

Democrats also held on to their majority in the Senate, picking up two seats in early returns with the possibility of a third while Republicans are expected to maintain majority in the US House of Representatives, which they currently control by 242-193.

Barack Obama is the third consecutive president of the US to retain office after his predecessors George W. Bush and Bill Clinton.

Obama became the only African American to hold the office of president in 2009 and he has now defeated Republican Mitt Romney to get a second term in the White House.

William J. Clinton, better known as Bill Clinton, became president in 1993 and went on to retain his office till 2001.

His predecessor Ronald Reagan won in 1981 and then retained the presidentship, with his term ending in 1989.

The norm is that no US president serves more than two terms.