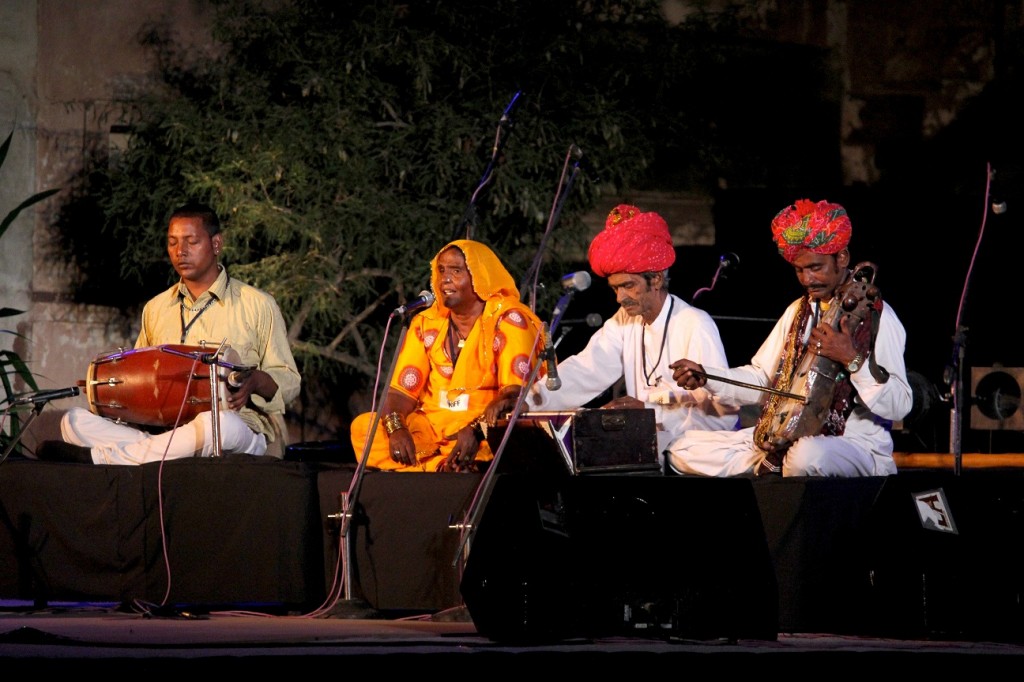 New Delhi: Folk music is silently tipping the gender balance in northern, eastern and southern India with more women from little known village communities using it as a legitimate grassroots voice – and are being heard across the country and abroad.

Sugna Devi’s voice rings like an untamed desert bird soaring in flight from behind her ‘ghunghat’ (veil) – a swathe of cotton drape that covers her head. She sings as she wraps up her morning meal on the ‘chulha’ (hearth). Sugna Devi, one of the few women vocalists among the tribal snake-charmers’ Kalbeliya community at Osia Tehsil Palodi, a village in Bikaner, is a global celebrity. She sings while most of the Kalbeliya women dance.

“I learnt to sing Kalbeliya folk songs from my mother nearly 35 years ago. I did not want to dance like other women in the community. I was allowed to follow my vocation because my voice was powerful,” said Sugna Devi.

The spurt in cultural festivals like the Rajasthan International Folk Festival, Delhi International Arts Festival, Jaipur Literature Festival and the Indian Council for Cultural Relations-sponsored folk festivals have opened the doors to women in the last decade to bring folk genres on to the main music stage.

In the villages of West Bengal women Baul exponents like Parvathy Baul and Mimlu Sen have been carrying the tradition to niche folk platforms in Europe and the US while Maithili women singers like Sharda Sinha of Bihar have kept the traditional wedding songs alive.

It sure is a new sound of revolution from the margins of urban India.

In southern India, women folk musicians are the lifeline of village and temple festivals. And in the northeast, women sing of life as they work.

Sugna Devi, who has performed in Australia and the US, uses music as a medium of empowerment in her village.

“It spells freedom for me. I teach 50 Kalbeliya girls to sing in my community. I want more women to sing and make a career out of it, rather than dancing… It is a process of economic and social empowerment,” the musician said.

One of her students is Rekha Devi, a young Kalbeliya woman, who has been training under Sugna Devi for the last three years. “I sing at weddings and at concerts with Sugna Devi. I prefer singing to dancing… I wish more women from our Kalbeliya community would sing,” Rekha said.

Her father Puran Nath has four girls and he promises to teach all of them to sing.

“I will love it if one of them makes a profession out of singing in Bollywood,” Puran Nath said.

The women musicians from his community make between Rs 1,000 to Rs 4,000 every concert.

Jamali Bai, a folk singer from Bikaner, has been singing Maand Lok Geet on All India Radio for the last 40 years.

“My mother and other women of the village would sing at Jagran – the vigil of the goddess. I would hear them sing as a child and was memorised by the songs. Later, I began to sing,” said Jamali Bai.

Jamali’s biggest support is her husband, Rauzar Khan. “I like the fact that she sings. She teaches around six girls at home. Many of these girls go to school but we want our girls to earn with their folk music,” Khan said.

Ghavra Devi Bikaneri, a blind exponent of Nirgun folk songs and the ‘dholakia’ (percussion) from Bikaner district, has travelled all over the country to render her “Krishna-bhajans”.

For the 70-year-old vocalist, robed in saffron, “music is truth, inner consciouness and the road to freedom”. The spirited Ghavra makes around Rs 10,000 from music every month. A few years ago, she refused a crash award from the West Bengal government because she was “told to wear a sari” to the ceremony.

“I lead life on my terms,” the musician said.

“Last year, a Bhopi folk singer from Rajasthan, Bhanwari Devi, received an overwhelming response from the British audience at the Edinburgh Festival. I loved the authenticity and purity of her voice,” said Jonathan Mills, the director of the Edinburgh International Festival, who was in the country last month.

“The soul of the folk music from India has the ability to hit you in the pit of your stomach,” said Mills, scouting for avenues to take more Indian folk singers, including women, to Edinburgh next year.