Dehradun : Uttarakhand, this small mountain state that came into existence about 12 years back, has problems galore.

One of the most important one is that of migration of the people from the hills to the plains, for various reasons, one of them being that the land holdings do not produce enough to sustain families. 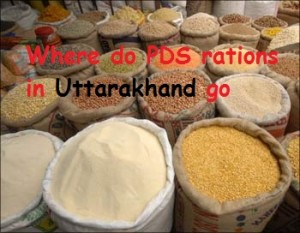 Under such set ups the public distribution system (PDS) plays a major role, in as much that the families get wheat, rice and sugar at prices that are cheaper than in the markets.

But courtesy the unholy nexus of the babus of the PDS and ration card shop owners, most of this ration rather than being distributed to the ration card holders, finds its way in to the open market.

Recently the authorities seized 244 quintals of wheat that was meant to be distributed under the PDS kept at a flour mill in Haridwar, where flour would have been made and sent to the markets.

Though no ration shop owner was taken into custody, but it was known the wheat was diverted from PDS, as the sack in which the wheat was kept had PDS marking.

But then the supply from the PDS did not stop. Yesterday the authorities raided the very flour mill yet again and found another 200 quintals of wheat that was meant for distribution under PDS lying in the mill godown.

But this time the mill owner was playing it safe, he was transferring the wheat from the PDS sacks to other sacks to evade detection and was caught while the process was still on.

Apparently if within a week, about 450 quintals of PDS wheat can be recovered from just one flour mill of one district, one can but imagine the extent to which the practice is prevalent in this small mountain state, which has become synonymous for corruption and zero governance.

And what is all the more surprising is that the officials of the civil supplies department claim that they are giving stocks of ration to the ration depots, but why are the depots not distributing it to the ration card holders, is something that they have never bothered to look into because of the hand-in-glove operation.

Ironically, the ration card holders on going to the ration card supply shops have to return empty handed for they are either told that the supplies have not come so far or they have finished.

The shop keepers do not offer any explanation as to how ration has finished when not even 70 per cent of the card holders have been distributed the ration.

But then this is Uttarakhand.

To get any work done in any office one has to grease palms or else just forget that the work will ever be done, and are deprived of even what is their due, courtesy the corrupt babudom. And then it is called ‘dev bhhomi’, what an irony.