Kartarpur is the abode of Baba Guru Nanak Ji, the founder of Sikh religion, equally respected among Muslims and Hindus.

The road from Narowal to Shakargarh sub-district, where Darbar Kartarpur Sahib is located, is a newly built double road. Gurudwara Darbar Sahib Kartarpur is about 140 km. from Lahore and 180 km. from Nanakana Sahib via Lahore.

You can divide a piece of land but you cannot divide a belief. This was my first impression of Kartarpur, a historic and sacred place, located just three kilometers away from the Indian border in the North Eastern city of Narowal in the Pakistani side of Punjab. 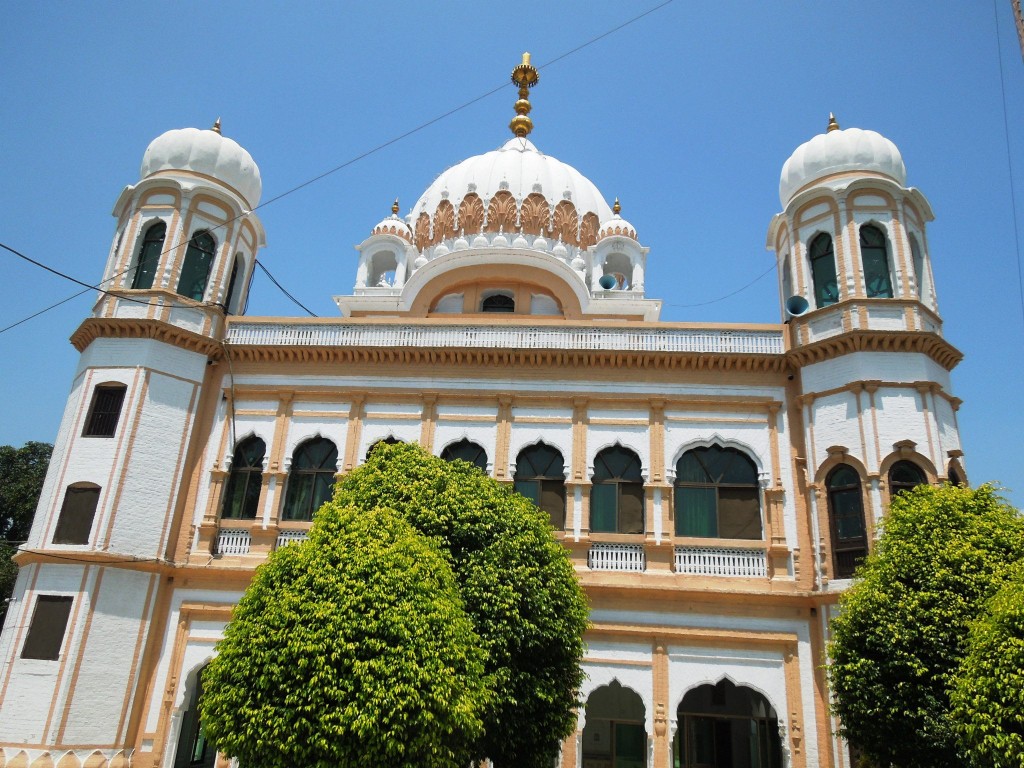 The Gurudwara is located next to a small village named Kothay Pind (village) on the West bank of the Ravi River.

The original resting place founded by Guru Nanak Ji was washed away by floods of the river Ravi and the present Gurudwara was rebuilt in its place at a cost of Rs.1,35,600, from funds donated by Sardar Bhupinder Singh, the Maharaja of Patiala.  It was subsequently repaired by the Govt. of Pakistan in 1995 incurring expenditures in lakhs of rupees.

The Gurudwara at Kartarpur has a spacious and beautiful building and can be seen from another Gurudwara located across the Indian border in the historical town of Dehra Baba Nanak.

Unlike other holy places of Sikh religion in Pakistan, this Gurudwara is one of its kinds. And if you see Muslims offering prayers at the Gurudwara, don’t be surprised!

According to Sikh history when Guru Nanak died, Hindus and Muslims disagreed upon how to perform his last rites. A samadhi (Hindu tradition) lies in the Gurudwara and a grave (according to Muslim traditions) lies on the premises as a reminder of this discord. His Hindu followers wanted to cremate the remains as per Hindu tradition, while his Muslim followers wanted to bury the body as per Islamic tradition.

Guru Nanak suggested that each group should place a garland of flower besides his body, and the party whose garland remains fresh after three days could dispose of his body according to their tradition.

It is said that the next morning, upon raising the cloth under which the Guru’s body lay, 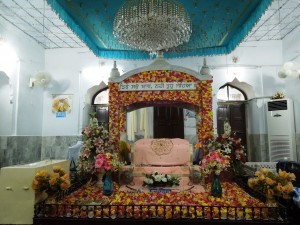 only the flowers placed by his followers were found. The Hindus cremated their flowers whereas the Muslims buried theirs.

There are historical references that Guru Nanak Dev was against division of society on the lines of Muslims and Hindus (and Sikhs). Muslims treated him like a ‘peer’ and the Hindus revered him as the Guru.

This aspect was well demonstrated in 1947 when Sir Cyril Radcliffe drew boundary-line between India and Pakistan. According to the June 3, 1947 division plan, the whole of Gurdaspur had gone to Pakistan. That meant Kartarpur going deep into the Pak territory. But the plan didn’t work and had to be amended. Now the District of Gurdaspur was bifurcated and the line that bisected Kartarpur from its bare chest worked. Two of the tombs went to the Pakistan side and one fell on the Indian side.

The plan worked but Kartarpur remained abandoned and desolate for all these 56 years and wild grass had grown all around this building. And the relation between the two countries also remained wild all these years.

Later, sometime in 1998, both India and Pakistan governments reached an agreement to build a corridor from Dera Baba Nanak to Kartarpur Sahib (about 4 kilometer in length) in order to enable the Sikh pilgrims to visit Gurudwara Kartarpur Sahib in Pakistan without visa or passport.

And that was all, nothing happened after that, no action taken. 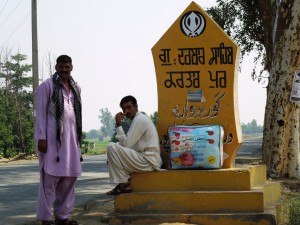 Sikh devotees often gather near the border fence and offer prayers while looking at Gurudwara Kartarpur Sahib in Pakistan. Border Security Force has specially constructed ‘Darshan Sthal’ by providing binoculars to the visiting devotees for a clear view of the Gurudwara.

It is obvious today that the Kartarpur Dera Sahib Gurudwara can play a vital role in the long term peace in this region. Kartarpur-Dera Sahib can be used as a corridor to peace in the region.

In the recently concluded meeting of the respective foreign ministers in Islamabad agreements regarding visa liberation have been reached and will be remembered as a landmark decision.

But it is just not enough, we need to move even closer and welcome each other warmly with open arms. It’s time to speak the language of peace loud and clear and make our voices heard above the din of conflict, as peace should be our future. Hatred among the society and region should no more be advocated.

Echoing the lines of the Punjabi poet Surjit Patar, who so aptly and simply put this forth:

‘Yesterday we divided Waris Shah, today it is the turn of Shiv Kumar Batalvi, have you forgotten the old wounds that you are looking for more anew?’

Written by: Shiraz Hassan, a journalist and researcher based in Islamabad. He blogs here.