Mumbai: A skull made out of e-waste, a sculpture made out of diamonds, a Fiat car transformed into a copper sculpture, a first display of renowned Damien Hirst and a painting of the mythical deer Aniya – these are the key highlights of the second edition of the India Art Festival, truly a collectors’ paradise.

The festival that kickstarted here Wednesday showcased over 3,000 artworks by over 500 artists from 50 cities across India.

One of the biggest attractions amongst them was the very first display of the works of well-known British artist Damien Hirst.

A new generation gallery based in London, ‘Art Concoction’ is run by two young Indian entrepreneurs. They are the first to bring three of Hirst’s works to the country.

With the theme of ‘Life and Death’, all three of Hirst’s works depicted death in different forms through the human skull.

The works were a part of the limited edition prints from Hirst’s series titled ‘Till Death Do Us Apart’ and ‘For The Sake of God’.

“We have been interacting with the artists other than Hirst since some time now. While our interactions helped us get their works to India, it took us an effort of six months to procure Hirst’s works through the gallery director in London who regularly displays his works,” said Parneet Soni, director of Art Concoction.

Another painting that caught the eye was that of a mythical deer called Aniya, by artist Kedar Kulkarni. 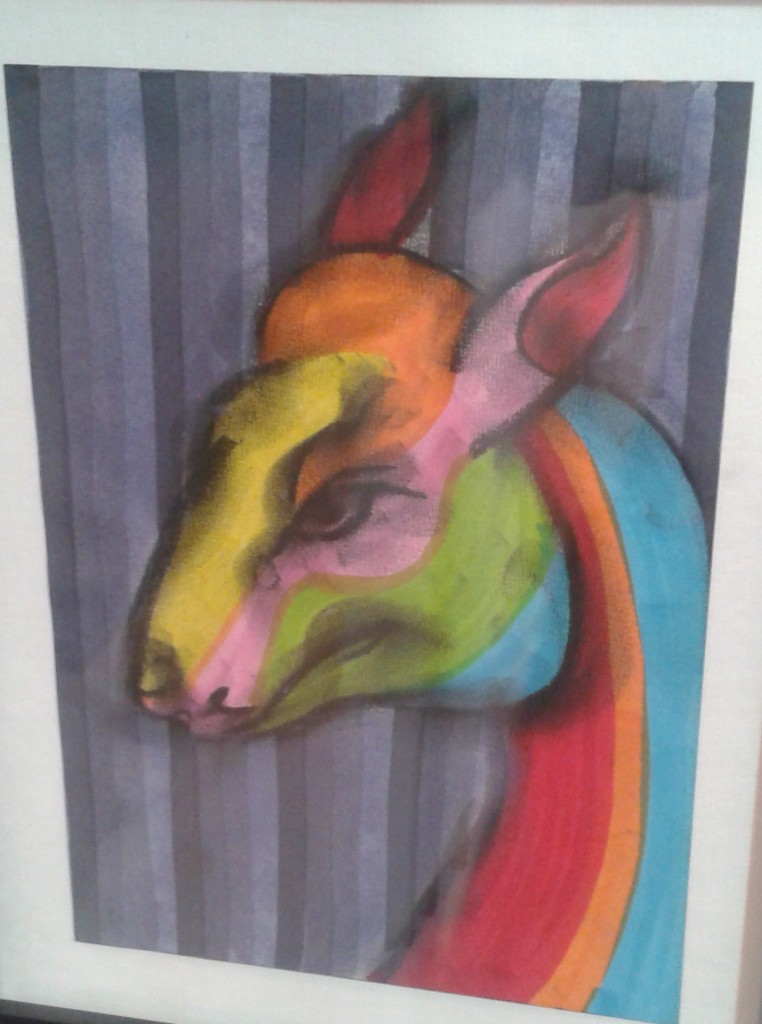 “Aniya is a spiritual being in the Buddhist culture. Aniya’s skin is worn by Avalokitesvara – considered to be the ‘bodhisattava’ (enlightened being) who embodies the compassion of all Buddhas,” he said.

Also inaugurated at the exhibition was an installation made fully of American flawless diamonds by artists Prakash Bal Joshi and Amisha Mehta.

The installation is artist’s response to the discovery of ‘God Particle’ by scientists using collusion of subatomic particles.

“We have depicted a human subconscious by use of diamonds. We used diamonds as they are not only most sought after, but are also unbreakable sparkling material, holding key to secrete of universe,” said Joshi.

“The glow coming out of god particle warns against alterations and assures eternity and that is something we have tried to depict through the glow that the flawless diamonds emit,” said Mehta.

Yet another sculpture that coaxes you to reduce the computer waste was that by artist and art director Sukant Panigrahy. The skull, made out of 150 kilos of e-waste gave out a clear message – “E-nough of E-waste”.

“People need to know that while nature recycles most of the waste, plastic and computer waste are not amongst them. Through my sculpture, I have tried to tell people to reduce the e-waste which is much more toxic,” Panigrahy said.

Titled ‘Triumvirate’, the installation was made entirely out of wooden rods and panels painted with acrylic and oil colours.

“Here, I have tried to portrait three revolutionary giants who had identical essence of bringing in the changes for the good of the society. But there was an apparent difference in their approach,” Ganacharya said. 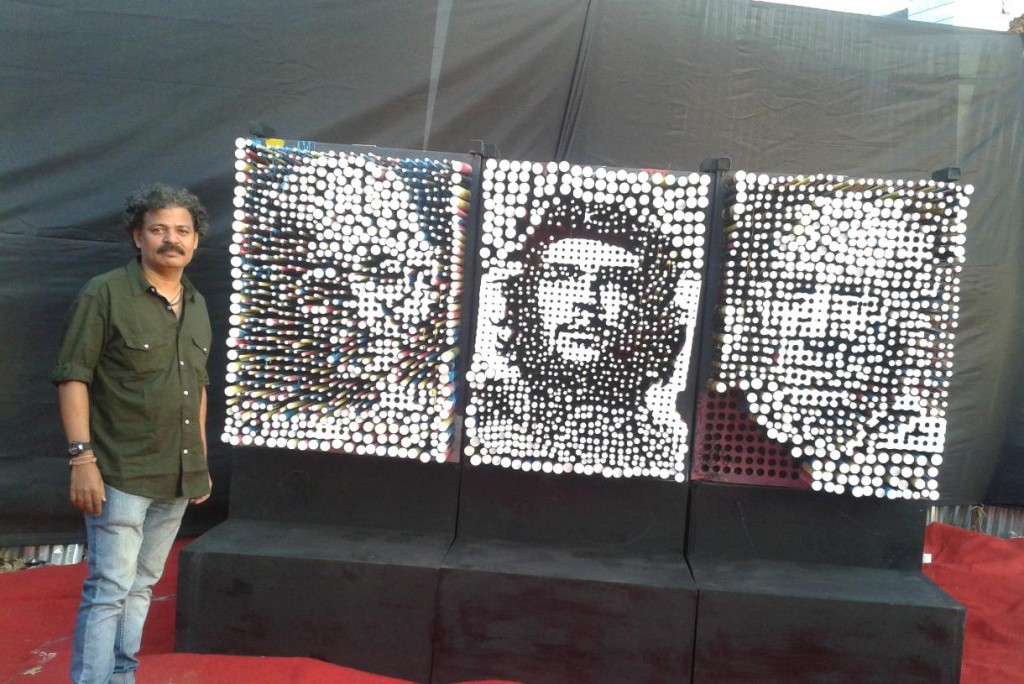 “Indian freedom fighter Gandhi’s non-violent ways, guerrilla leader Guevara’s fighter spirit and Spanish artist Picasso’s non-verbal liberty of self-expression make us realise the different channels through which a single idea can be worked upon,” he added.

Ganacharya said that his work experience in print media helped him realise that pixels play important part clarity of an image.

“Hence, I have used wooden rods to create pixels and extruded the pixel’s level along with the appropriate use of colour composition for best resolution,” he explained. 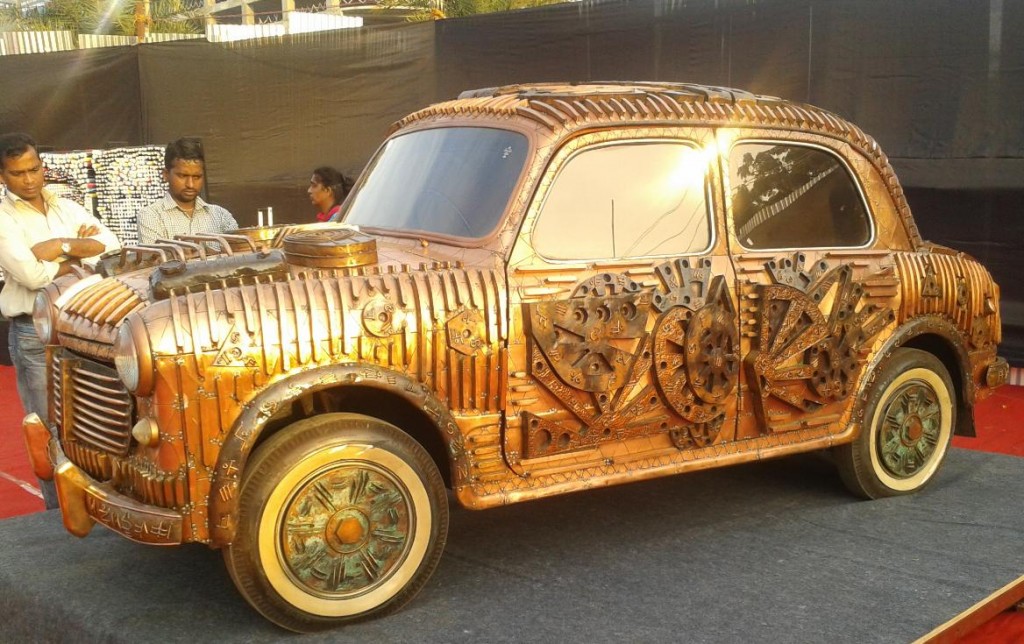 Also attracting a lot of attention was a 56 Fiat Millicento transformed into a sparkling copper sculpture by artist Yusuf Arakkal, who gave it a new avatar now calling it ‘Arto-Mobile’.

Arakkal, who bought the car from a friend in 1984, said it his first love and refused to part with it. He immortalised the car by turning it into a sculpture after discarding the engine and gear-box of the car.

Arakkal also brought together several elements from the two ancient civilisations – Egyptian and Indus Valley – on the surface of the car showing the true confluence of art and technology, philosophy and dream, installation and sculpture.