New Delhi: Connectivity is the buzzword in India’s relations with the 10-member Asean as it rebuilds road and sea links to boost trade and people-to-people ties with an economically vibrant region.

A Trilateral Highway – linking Thailand and Myanmar with India – called Friendship Road is slowly nearing completion, while a car rally kicks off from Yogakarta in Indonesia to finally end in India’s northeast. An Indian naval ship is docking at ports of the Asean countries, reviving and building on an ancient sea route link with the region.

“The Asean region is economically very important, especially in the context of Asia doing very well at a time of the global economic crisis,” said a senior official.

India’s 1.2 billion population, with its huge young workforce, combined with Asean’s 600 million people constitute 1.8 billion people, while India and Asean together have a GDP of $3 trillion.

The Asean region is expected to average an annual rate of 5.5 percent growth over the 2013-17 period, according to an Organisation for Economic Cooperation and Development (OECD) report.

“It is a very significant relationship and there is an identity of perspective and objective,” the official added, not wishing to be named as per norm.

India has built most of its stretch of the 1,400 km Trilateral Highway, which is to connect Moreh in Manipur, northeast India, to Mae Sot in Thailand. “A part of it is being built by Thailand and a part by India. India is building 160 km, of which 132 km has been completed,” the official added. The highway is slated to be completed by 2016, and will provide “huge connectivity” for trade and people-to-people contact.

During Prime Minister Manmohan Singh’s visit to Myanmar in May this year, India committed to taking up the renovation of 71 bridges of World War II vintage in that country, including in the Kalewa-Yargi section, which is over 100 km long.

The Indian government has already invested $257 million as grant-in-aid on this project.

Manmohan Singh, in his address at the 10th Asean-India summit at Phnom Penh Nov 19, said the working groups on the project and the highway are “welcome steps in implementing the vision of India-Asean connectivity.” 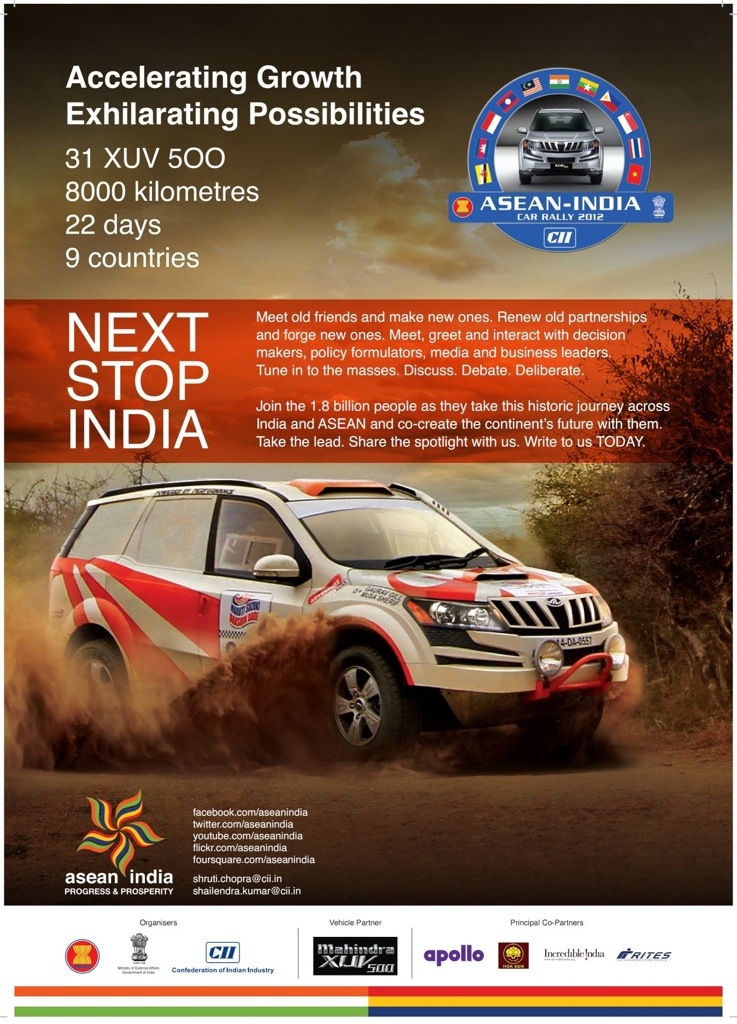 The Asean-India car rally, which kicks off on Nov 26 in Yogyakarta, will pass through eight Asean countries. The rally will traverse 8,000 km over 22 days. It will enter through Moreh, on the border between India and Myanmar, and pass through Nagaland and enter Assam. The rally will be flagged down Dec 17 in Guwahati in the presence of the trade ministers of Asean.

“Clearly a big focus is on connectivity and the northeast. Connectivity is an area of priority,” the official stressed.

Manmohan Singh said the India-Asean car rally and the sailing expedition of Indian Naval Ship Sudarshini “highlight the importance and the potential for connecting India and Asean by sea, surface and air links.”

INS Sudarshini set sail on a six-month voyage Sep 15 from Kochi. It is to call on 13 ports in nine Asean countries and will end in March.

“During its port call, the ship will take on a few naval cadets for short stint training, as part of navy-to-navy cooperation; besides, cultural and business events will be held,” the official added.

“INS Sudarshini is retracing the traditional trade route and also the current ones.”

Tourism is also a major focus of road and sea links with Asean. India has a visa agreement with seven of the 10 Asean countries and India and Asean have also inked a MoU on tourism, the official added.

India and Asean held several events this year to mark their association, including visit programmes by journalists and students.

As part of the people-to-people programmes, India has given 640 ITEC scholarships to low-income Asean countries so far.

Agriculture ministers of both sides met last year and this year. India and Asean have also started a newsletter on agriculture and an Agri Expo was held in northeast India this month.

“Exchange visits by farmers to study technologies are also planned,” the official said.

India and Asean have an FTA in goods, which was inked in 2009 but became fully operational in August last year. India-Asean bilateral trade is nearly $80 billion.

India is now negotiating an FTA on services and investment with the Asean countries which are Brunei, Cambodia, Indonesia, Laos, Malaysia, Myanmar, the Philippines, Singapore, Thailand and Vietnam.