There was a young man of 16, without a helmet, riding his 70cc Honda motorcycle moped above 80kmph. The road was wide open, nothing less than an express way.

Our auto-rickshaw was flooded with passengers, four in the back, five in the middle, and two hanging to the doors of the rickshaw.

And there was one sitting close on the driver. It was very difficult to tell which one of them was actually driving.

And all of a sudden, the young boy on the moped takes a left turn, without giving any indicator to turn left. The auto rickshaw, which was cruising at 80kmph stopped with a screeching sound.

The auto driver hurled ‘appealing’ expletives at the young guy who replied with the same vigor and better confidence.

The passengers looked at each other; nobody questioned the auto driver about his speed. Everyone was visibly terrified.

Sounds like an everyday scene of Amritsar, Jammu, Pune, Chennai, or Mumbai roads, doesn’t it?

However, this is a common scene in Lahore, on the other side of the Attari Border.

Welcome to Lahore, the laws of our land are applicable across the border as well.

We listen to their songs, they watch our movies. We admire their ladies and ‘ministers’, they admire our actresses. We never want to lose a match against them in the World Cup; they want to win at least once, desperately. We listen to their songs, compare our Coke Studio with theirs and curse the Bollywood Musicians. They watch our movies, in buses, in cinema houses, and almost everywhere, and curse the Pakistani film industry, the Lollywood.

Crossing the border on foot might look like a dream come true considering the Indo-Pak relations; however, the Wagha Border is one of the busiest borders between India and Pakistan. Everyday hundreds of people, including pilgrims, and diplomats cross this border on foot.

One can see hundred of trucks lined up on both the sides waiting for the ‘gates’ to be opened.

The ‘gates’ remain open in the daytime. Soldiers too laugh like everyone else, share jokes, celebrate Diwali, Eid, and discuss cricket matches. The evening ceremonies may say something else, but the mornings are just what they should be, bright and clear. 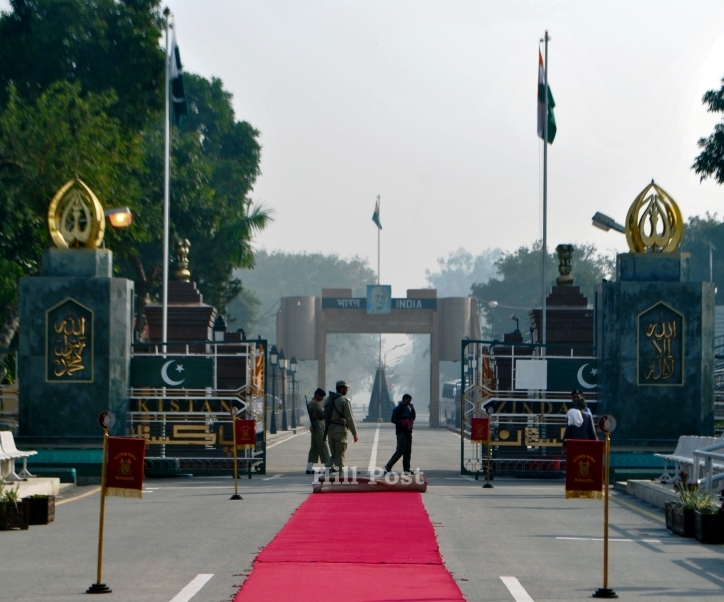 Once you cross the border, people on the other side look the same. They have good wide roads but pathetic driving sense. They have government officials who upfront ask for a bribe, without any shame.

There are people who will travel 350 kilometers with you just to ensure your safety, so that nobody robs you and you go back with a clean image of Pakistan in your heart.

And we have people of similar sorts in our country.

If you go back in time, ten years ago Indians in Delhi, Mumbai cities loved speaking with an American accent. Conversing in Hindi with ladies and in aircrafts was strictly forbidden in those times.

Lahore and Islamabad are going through those times now. They love American accent, all of them.

And if you tell them that you are from India, they feel happy. Everyone expresses his/her desire to visit India once in their lifetime.

Probably, after the Haj, this is second greatest wish of every Paksitani.

To see, what lies on the other side of the border. A world unseen, a lost brother, a forgotten story.

‘Pakistan Murdabad’ is one of the most popular slogans that unite the Indians.

The whole Pakistan be damned, that’s what it literally translates into.

So next time when we say this slogan, we should exclude all those whom I met during my visit to Pakistan. Probably, damning the whole nation in one word is something which can be termed as another form of extremism.

Probably, everyone should cross the border just to see what lies on the other side. And if you remove those gates and ‘Welcome to Pakistan’ sign-boards, you will be confused and disheartened to see no difference at all.

Because there is no difference; None, Whatsoever!

Those gates that divide these countries into two must be given a chance to speak someday. And they will tell us why these gates should be dismantled, burnt down, and thrown into the Chenab or the Ganga.

Once these gates were created because people on both the sides were emotional and in a hurry to ‘gain’ something. Dismantling these gates might sound like another emotional cry and an impractical one as well.

However, the walls that are deep inside us must be dismantled because what lies on the other side once belonged to us.

Once there was past, a sad story that still pains people on both the sides.

However, once a wise man said, “There was past before 1947 as well. It would be great if we try to stick to that because that’s what makes more sense.”