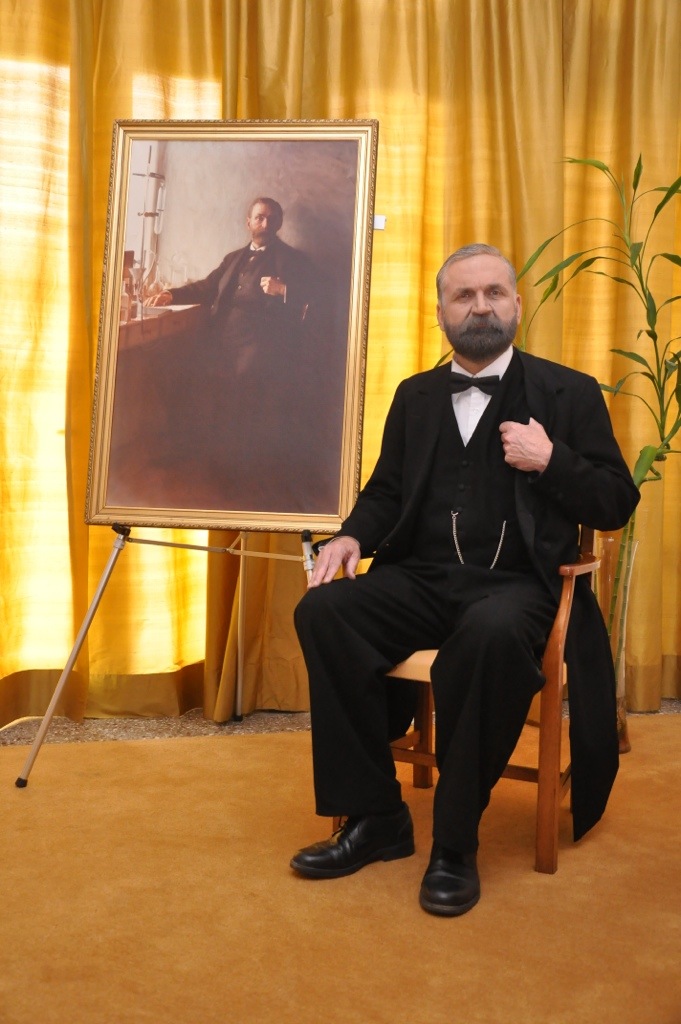 New Delhi: Alfred Nobel, the maverick innovator, entrepreneur and founder of the Nobel Prize, has “arrived” in India for the first time after his death 116 years ago – looking just as he did during his heyday and saying he would love to work in a Bollywood movie.

Meet 54-year-old actor Peter Sundh, the Nobel impersonator and look-alike from Sweden who has been working for the last eight years on a project to resurrect the man behind the prize . He impersonates at museums in Sweden and at the Nobel Memorial Weeks around the world.

Seated on a high straight-backed chair at the Swedish embassy in the capital, the impersonator, dressed in a 1896 three-piece black suit comprising a long coat, vest, white shirt and a silver fob chain, recalled an anecdote about Nobel’s home and will in Sweden. And the way it changed moulded the course of history.

It is his signature act, the core of his revival project to take Alfred Nobel, the man, to the lay people.

Next to Sundh – who stepped into Alfred Nobel’s skin with the ease of a conjurer with his blue eyes and bushy auburn beard – was a large framed painting of Nobel painted more than 100 years ago.

“The project started in Karlskoga (in Sweden) seven eight ago, where Alfred Nobel owned a home with a stable that had three horses. I wanted to tell my story to people in very short words why Karlskoga was so important to Alfred Nobel. After his death in 1896, there was a problem with the will. He lived in Paris for many years and most people said the will should be worked out in Paris,” said Sundh.

The actor said “many people, including the king of Sweden was against Alfred Nobel’s will”.

“But the will was in Swedish and a French executor couldn’t work with it. The French authority wanted Nobel’s representative Ragnar Sohlman to execute the will in Sweden. A court in Paris was chosen to arbitrate whether Alfred’s real home was in Paris or Karlskoga,” Sundh narrated.

Nobel had “26 years in Paris and three years in Karlskoga”. Everyone thought it would be Paris, Sundh said. But an old French maxim, “home was where a man had horses in stables”, decided the case in favour of Karlskoga where “Nobel had three horses in his stable”. The will was legally put into action in the Swedish town.

The home, in a way, became the birthing crib of the Nobel Prize, Sundh said in his best “Alfred Nobel” voice.

The reactions to Sundh’s act range from surprise to awe. The actor encourages viewers to question him about Nobel’s life. And people usually want to know “how can you start the prize in peace and work with weapons and why there is no prize for mathematics?”

Nobel wanted to fete those who had done something good in life and in mathematics; one does not do anything for mankind, Sundh clarified on behalf of Nobel, quoting from his letters. Nobel also “thought about peace – a lasting defence so that the enemy did not dare attack”, Sundh said.

Sundh, who has trained in Swedish amateur theatre at Longway, said in 1996 he realised that he resembled Nobel and “wanted to do something about it”.

He extensively researched Nobel’s life, reading biographical books, including accounts by Ragnar which documented the innovator’s personal habits in detail. “I picked up Nobel’s body language from Ragnar Sohlman’s biographical descriptions of his boss. Nobel had clear blue eyes like I do and looked straight into the eye while talking. He was brusque, sharp and his mind rarely stopped working,” Sundh said.

Nobel had an awkward bent gait because he suffered from rheumatism around his hip and knee, Sundh said, walking around like Alfred Nobel. His 1896 suit is an original from a period clothes shop in Sweden. It cost him the equivalent of Rs.50,000 in Indian currency.

Sundh wants to explore beyond Alfred Nobel. “I would love to work in a bi-lingual Bollywood movie in India,” he said.

He was in India for the Nobel Memorial Week Oct 29-Nov 4.