Srinagar: After three candidates withdrew their nominations Monday, 37 candidates are now left in the fray for the four state legislative council seats reserved for panchayats (village heads) across Jammu and Kashmir. 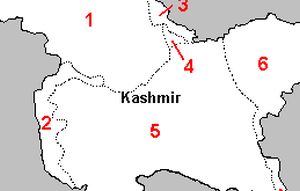 Although the 2011 panchayat elections were fought on a non-party basis, various political parties, including the Congress, the NC and the opposition People’s Democratic Party (PDP), had fielded candidates in those elections.

The voting for the four council seats is scheduled to be held Dec 3. Nearly 35,000 panches and sarpanches constitute the electorate for these seats.

The support base of any single political party in the valley and the Jammu region is far from clear.

Though it is generally believed that the ruling alliance has a fair chance, those in the opposition camp believe they can pull off a surprise.

“Believing that the ruling alliance has an edge over us in these elections is far from reality. We have more representation in various panchayats, especially in south Kashmir areas”, said a PDP leader who did not wish to be named.

The NC is counting on what it believes is its firm vote bank among the panchayat members.

“We did not field candidates for the 2011 panchayat elections, but there is no doubt that people affiliated with the NC won most of those elections. That obviously is our vote bank for the legislative council elections,” said Sheikh Ghulam Ahmad, an NC leader.

Although the outcome of the elections to the four legislative council seats would have no direct impact on the 2014 assembly polls, it may indicate the voters’ mind.

Of interest would be the fate of the candidates fielded for the council election in north Kashmir by People’s Conference led by Sajad Gani Lone, son of slain separatist leader Abdul Gani Lone.

His associates reveal Sajad Lone is preparing to participate in the 2014 state assembly elections.

“He plans to field candidates for many seats in the valley and outside during the next assembly elections,” said a party source.