Before filing his papers, the five time former chief minister accompanied by his son Vikramaditya Singh, reached the elections officers office with a large procession of supporters. 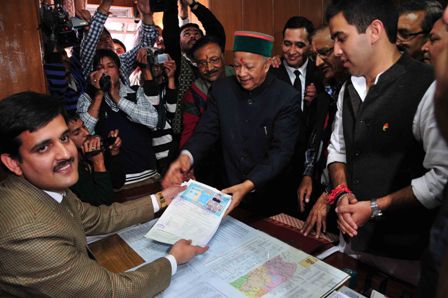 In the papers presented before the returning officer, Virbhadra Property declared that there is a case against him registered under Prevention of Corruption pending before the Court of Special Judge (Forests) Shimla.

The first information report (FIR) in the case was registered 3rd August, 2009 and charges stand framed in the case, the affidavit with the nomination papers reveals.

As occupation Virbhadra declares to be a member of parliament and wife Pratibha Singh as a housewife.

In terms of asset value, the scion of the erstwhile Bushair royal estate has declared a total worth of Rs 27.34 crore, which includes Rs 8.27 crore as movable assets and Rs 18.78 crore as inherited assets.

For the year 2011-12, Virbhadra has filed an income tax return of Rs 47.68 lakhs reported under two PAN numbers, while Pratibha Singh had a total income of Rs 12.97 crore for the reporting year.

Under movable assets, Virbhadra included Rs 10 lakhs as cash in hand, over Rs 5.90 crore in fixed deposits in 12 bank accounts, a LIC insurance cover of Rs 1.51 Crore, jewelry worth Rs 50 lakhs and ownership of two vehicles a 2009 Toyota purchased for Rs 12.91 lakhs and a 2012 Innova purchased for Rs 12.69 lakhs.

Agriculture landholdings with the former ruler of the Bushair state stood at 14-52-12 hectares at two places carrying a current value of Rs 80 lakhs and holds property worth Rs 18.78 crore.

The 4,53,505 square feet of built up property held by Virbhadra includes the majestic Padam Palace at Rampur, a heritage building that is spread over 2.8 hectares and has been valued at Rs 10 crore, which includes the land value.

Holly Lodge, the Shimla house of Virbhadra along with an annexe and accompanying servant quarters has been put a value of Rs 5 crore and the ancestral estate Shanti Kunj come by as inheritance at Saharan has been valued at Rs 2 crore.

Besides, he also owns a 1500 square meter flat in a cooperative society in Delhi, the purchase value of which was Rs 20.70 lakhs and after making an investment of Rs 9.30 lakhs, the current market value has been put at Rs 30 lakhs.

The former union minister has also declared a Rs 4.02 lakh loan taken from HP Vidhan Sabha as the only pending liability.

In the declaration, spouse Pratibha has movable assets of Rs 4.87 crore, that includes Rs 47 lakhs worth of jewelry and precious stones,a LIC policy cover of Rs 2.2 crore and investments in equity and bonds worth Rs 3.31 lakhs.

The balance amount is in fixed deposits in 9 bank accounts. In terms of built up property, she owns a building at Sarahan which carries a value of Rs 30 lakhs.

Two children, Aprajita Kumari and Vikramaditya Singh, have been shown as dependents, with Vikramaditya having moveable assets of over Rs 1.19 crore (which includes Rs 90 lakhs as LIC policy) and Aprajita has Rs 24.40 lakhs as movable assets.

Aprajita also has a Rs 20 lakh loan liability against her name taken as an education loan from HP State Cooperative Bank, Shimla.