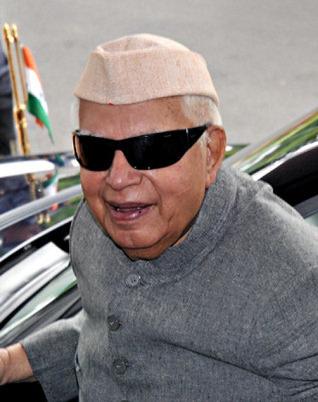 Dehra Dun: The 87-year-old former Uttarakhand chief minister and Andhra Pradesh governor Narain Dutt Tewari may have been proved to be the biological father of Rohit Shekhar, in a case filed in the courts, following the result of the DNA test, but the veteran Congress leader has taken the necessary precautions that his legal son remains satisfied with that.

For recently Tewari, who claimed that he is going to reveal some startling facts on his 88th birthday that falls on Oct 18, also said that the only asset he has left is the pension that he gets. Though he did not disclose what he had done of his other moveable and non-moveable assets, but there was enough to hint that he had “done away with them and had nothing more in his name”.

Though all eyes are now on Oct 18, but the cops have already started investigations, for his OSD, Bhawani Bhatt also said that during the time he was not well; his close associates had allegedly conspired against him for Tewari was given wrong medicines and overdose of sleeping pills, which had the effect of slow poison his system.

Tewari has hinted that some of the people who were very close to him during his stints as the governor of Andhra Pradesh and chief minister of Uttarakhand were the ones who had allegedly conspired against him. Breaking his silence after a long time, he has not even spared some people in his personal staff along with those very close to him.

Bhatt has in an interview also alleged that it was not only wrong medicines but an overdose of sleeping pills, that were administered by people very close to Tewari for their personal interests, which had the effect of slow poison on the ageing Congressman. However, he did not produce any sustainable evidence to support his allegations.

However, the police have not taken the allegations lightly. They have quizzed OSD, Bhatt and also some other members of the personal staff of the former Andhra Pradesh governor in the matter and have now posted extra security at his residence ‘Anant Van’, located in the sprawling campus of the forest research Institute here.

Though no complaint to this effect has been given either to the district authorities or the police, but the fact that an allegation of wrong medicines and an over dose of sleeping medicines were being administered to the Congress leader has been taken seriously both in official and political circles here. But all eyes are now on Oct 18, when perhaps the veteran Congressman may open his heart to the media on his birthday.