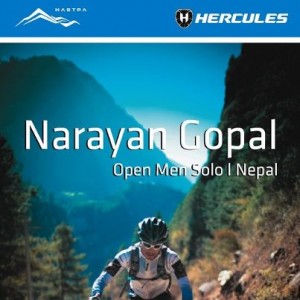 Shimla: Narayan Gopal from Nepal clinched the MTB Hercules 2012 title in the overall category. MTB Himalaya 2012 concluded here today after the riders moved across the landscapes of the state by covering more than 500 kms. The second position was secured by Aayman Tamang from Nepal and Richard McDowell from UK secured the third position. The top three winners were awarded with prize money of INR 100,000.

Abhinay Pochiraju stood first in the Weekender category. Apart from this, 28 other participants were also given consolation prizes.

This event marked another feather in the cap of the organizing team: the Himachal Sports and Tourism Promotion Association (HSTPA), Himachal Tourism, and Hercules Organizations.

Chief Secretary, S. Roy, Chief Guest on the concluding function said that Himachal Pradesh was promoting adventure tourism in the State in a big way. He also said that Himachal Pradesh is fast emerging as a hub for adventure activities. Himachal’s breathtaking landscapes make it all the more suitable for adventure sports activities, he said. He said that the State Government was promoting adventure sports such as Hang-gliding, Para gliding, Trekking, skiing, hiking etc.

He also said the State Government would make efforts to encourage such events, so as to attract tourists and provide them an alternate in adventure sports. The much coveted MTB Himalaya 2012 was flagged off on 29th September, 2012 and traversed through mountains and valleys across the Shimla and Kullu District. The riders this time traversed through the steepest pass of the state, the  Jalori Pass (3135 meter) in district Kullu.