Shimla: Hitting high ground over Himachal election as a referendum on corruption, BJP vice-president Shanta Kumar demanded a judicial inquiry into Robert Vadra deals just as Congress dug out the controversy surrounding Vivekanand Trust with Surinder Singla seeking a CAG audit of the trust run by Kumar and his family.

Known for not mincing words on corruption Shanta Kumar defended Nitin Gadhkari, whose companies are under a cloud, saying that the BJP president has already declared that he was open to inquiry from any government agency. 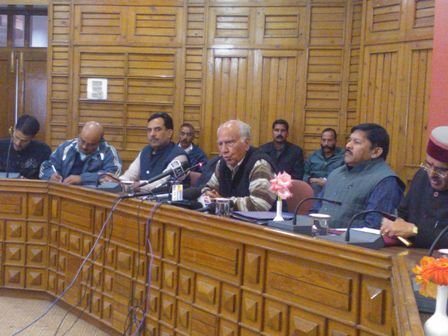 On persistent questioning, the senior BJP leader reluctantly admitted that some smoke clouds of corruption had afflicted the party but it still was a one with a difference as it resorted to self-introspection regularly.

Burying differences with chief minister Prem Kumar Dhumal, Kumar who had kept away for 3 years from even attending party executive meeting in the state over corruption issues, said, “I have never leveled any corruption charges against our own government.”

Shielding Gadkari as being a target of Congress conspiracy, he said “only a judicial inquiry would bring out the truth about dealings of Vadra and that of the wife of law minister Salman Khurshid because BJP had no faith in any government investigative agency.”

“Price rise and prevailing poverty was a direct outcome of rampant corruption in the UPA government that had abetted and nurtured the 2G, Coalgate or the commonwealth games scams,” he added.

Referring to Bangaru Laxaman and Gadkari, minister for parliamentary affairs Pawan Bansal in the afternoon responded to Kumar’s morning outburst by saying, “BJP makes no difference between business and corruption. One party president quit in disgrace and another’s businesses are suspect.”

Dragging Kumar’s dream project of setting up a super specialty hospital in Palampur, Punjab congress leader Surinder Singla demanded a CAG audit of Vivekanand Trust and a judicial query into its functioning since it was set up for the purpose.

“A bureaucratic query for doing a CAG audit of the trust run by Shanta Kumar and his family was turned down by the Dhumal cabinet,” Twenty acres of public lands and Rs 3.60 crore from the state exchequer has been donated for this private trust, he added.