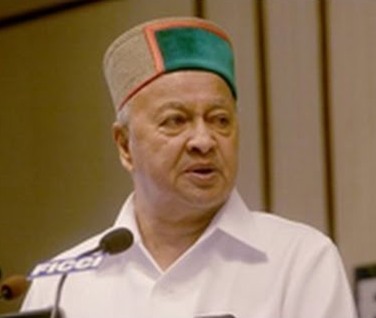 Shimla: It was the apple of discord in Greek mythology that led to the legendary Trojan War. Equally valuable golden apples have come around center stage to haunt Virbhadra Singh as he makes a bid to fight one last electoral battle to be chief minister of Himachal for the sixth time.

At the center of the controversy are the revised income tax returns of Virbhadra Singh, spearheading the congress election campaign, showing a twelve fold hike in agriculture income for three years that has brought into focus the orchards bearing the golden fruits which the veteran leader owns.

The affidavit filed by the former union minister before contesting the 2009 parliamentary elections from Mandi showed that he owned 15.42.66 hectares of land at three places, i.e. Damrali 7.67 hectares, Saharan 6.81 hectares and about 1 hectare at Kanai.

Before entering the fray as a chief ministerial candidate from Shimla rural seat on October 17, Virbhadra in the election affidavit declared agriculture land holding of 14.52.12 hectares.

While the Damrali land is said to have a fully grown apple orchard on it that bears fruit depending on the weather and on-crop and off-crop year cycle, on the Saharan land an old orchard was fully uprooted and replanted with better stock a few years ago. The young apple plants are still to reach maturity to bear full crops. 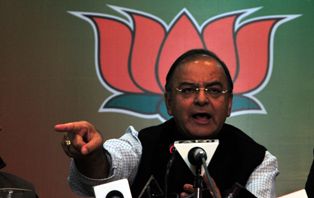 He alleged that besides a corruption case there was forgery also in the case as Virbhadra had entered into two agreements for management of his orchards for the same period. “Obviously one has to be ante dated,” he said.

In one of the orchard management contracts entered into with Bishambar Das on June 17, 2008, the annual amount payable is Rs 10.50 lakhs is reflected in the income tax return filed by Virbhadra Singh as Rs 11.05 lakhs under agriculture income for the year.

However, in the revised income tax return filed in March 2012, the agriculture income for 2008 by hot selling kingly apples is scaled up to Rs 2.21 crore, a 20 fold increase.

The money has been shown to have been received from one Anand Chauhan, a LIC agent, with whom Virbhadra is said to have entered into an agreement on June 15, 2008 for the management of his orchards.

Jaitely questioned, “how does Virbhadra explain Anand Chauhan receiving Rs 5 crores of cash deposited in his bank and paying for Virbhadra and his family’s LIC policies?”

Terming the agreement with Anand Chauhan for management of Virbhadra’s orchards a case of forgery, the senior BJP leader said that it was not only the congressman had been caught red handed in a corruption case but also having committed the crime of forgery that needs to be investigated by an special investigation unit.

Despite repeated attempts Anand Chauhan could not be contacted as his phone came switched off.

Mentioning the BJP leaders disclosure, Arun Chauhan, an orchard owner from Kotkhai says, “if what Jaitely is saying that agriculture income, mainly from fruit sales of apples, was retrospectively revised from Rs 51.05 lakhs for the years ended March 2008, 2009 and 2009 from the about 15.5 hectares of orchard lands of Virbhadra to Rs 6.15 crore is true, then many of us would like to see the golden apples growing in these orchards.”

“For an annual apple orchard income of plus Rs 2 crore, one should have a production of bout 25 thousand apples boxes,” says Chauhan.

Reacting to allegations of manipulating filings under agriculture income in the income tax returns that are being leveled by BJP leaders in the election campaign, Virbhadra Singh in a written communiqué said, “some senior leader of BJP and specially Arun Jaitley seem to know more about my IT returns than me and their information appears to be based on imaginary details.”

Terming all the information carried out by a section the media as incorrect, he added, “I have filed my income tax return for the financial year 2011-12 which is true and factual and is supported by vouchers and receipts.”

Expressing surprise how Jaitley could acquire IT information that is not even available under RTI, Singh said, “the assessment proceedings are still pending for scrutiny and the record pertaining to income tax return will be shown to the appropriate authority, when asked for.