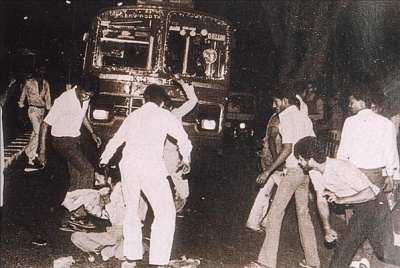 New Delhi: Tilak Vihar could be just another congested neighborhood in west Delhi until you take a closer look. Everywhere, there is a profusion of turbans and beards – a traumatic reminder that this is a Sikh resettlement colony built on the charred memories of riots 28 years ago.

The lapse of time has done little to dull the bitterness or erase the images of fathers, sons, brothers and husbands killed mercilessly in the rioting that followed the assassination of then PM Indira Gandhi by her Sikh bodyguards on Oct 31, 1984.

For three days after that, mobs trawled the streets of the national capital, massacring an estimated 3,000 Sikhs.

The memories live on, singeing the present.

In one of the apartments of the shabby flat complex in Tilak Vihar lives Pappy Kaur, 43, who saw 10 of her relatives killed in the east Delhi colony of Trilokpuri.

“I was 15 then,” she reminisces. “We were eight brothers and sisters, living in Trilokpuri. Ten of our family, including my father and elder brother, were killed by mobs encouraged by H.K.L. Bhagat,” she says, referring to the late Congress leader who many alleged had prompted the riots.

“My mother went mad. For three days, we were crying on the streets,” she adds.

Pappy Kaur is just one of the many survivors for whom 1984 was a black year. “We were ruined – and have still not got any closure.”

Twenty-eight years on, two issues are all important for the survivors of 1984. One, that their families’ killers still roam free. Two, their lives are still unsettled, still uncertain because of inadequate compensation, neglect and apathy.

The stories are the same in house after house.

Like Pappy, Baghi Kaur too lost 11 of her relatives in Trilokpuri in 1984. She too refers to the allegations of Congress leaders being involved and names Sajjan Kumar and Jagdish Tytler. Until they are punished, she asserts, there will be no closure.

“Frankly, I have no hopes. I have attended so many rallies and still, there is no justice for us.”

The level of frustration can be gauged by the fact that the conviction rate in cases is abysmal.

“No precise figure can be given for the convictions as tabulation has not been done. But I can tell you the trend is very small. I myself took a sample of 100 odd murder cases and there were only eight convictions. So one can say that the conviction rate is very nominal and, most importantly, the big leaders who led the riots have not been convicted at all,” says human rights lawyer Vrinda Grover.

Nirpreet Kaur, 44, whose father was burnt alive in Palam Colony, offers her perspective.

“Even if the lower courts sentence the guilty, they are acquitted by the higher courts. Even when somebody is sentenced to death, they often commute it to life (imprisonment), like what happened in the case of Kishori Lal, ‘the butcher of Delhi’,” she says.

“The most important problem facing survivors is making two ends meet. Many families lost their breadwinners. The widows who survived their husbands were (in many cases) not provided jobs. Those who did, earn peanuts,” adds Nirpreet.

Darshan Kaur, 53, of Karol Bagh is in such a condition. After her husband and father-in-law were killed, she worked for years as a maid, earning as little as Rs.50 a day. For the last 12 years, she has been working in a beauty clinic, on a salary of Rs.5,000. “I am doing it because I have no option. But I fear for the future,” she says.

There are other problems. The children of riot victims and survivors have grown up but with their fathers dead and mothers at work, there was no guiding hand.

Men like Baghi’s son, Balwant Singh, 36. He lost his father and uncles, grew up illiterate and is married now, with four children. Permanently ill with a stomach infection, he survives on his mother’s slender salary. “1984 killed us,” he says bitterly.

His younger brother, Balbir fared worse. He became a drug addict and died at 28.

The widows and orphans of 1984 are then nobody’s people.

“If you cannot punish the guilty and settle us, then bring back our dead,” says a bitter Pappy.

Is anybody listening?
– by Rajat Ghai/IANS