They come, conquer, make you dance to their tunes, and take your buck away! It was 64 years back we ‘earned’ our freedom and now when soothsayers point towards the dark skies in the times of slowdown, foreign money through FDI in multi brand is a scapegoat to revive the economy. But whether it’s true or not, is hard to tell.

The monopolistic buying power of the large retailers would weaken the marginal farmers’ position, resulting in lower share of value to them, dictating of the production techniques and output by the larger retailers and destruction of diversity in Indian agriculture. The idea that the farmer will get a better price for his produce if FDI in Retail is allowed is not holistic.

The open market does not work on altruism and social service. It negotiates the best for itself so it can corner the most for itself.

Farmer suicides are not because they cannot sell, but because they are unable to get remunerative prices for their produce owing to inefficiencies in the value and supply chain, traditional buying and selling techniques in mandis, lack of proper crop management and large number of intermediaries.

Big retailers and food processors alter crop selection to have farmers produce at their discretion and not by will. Corporate houses would not like to mingle with small and medium farmers because they are at a position of advantage and would strike contracts with a few big farmers thereby making the small ones succumb. FDI in retail would help only those farmers who collaborate with multinationals and accept their conditions, meaning they begin growing only those crops decided upon by their collaborators. 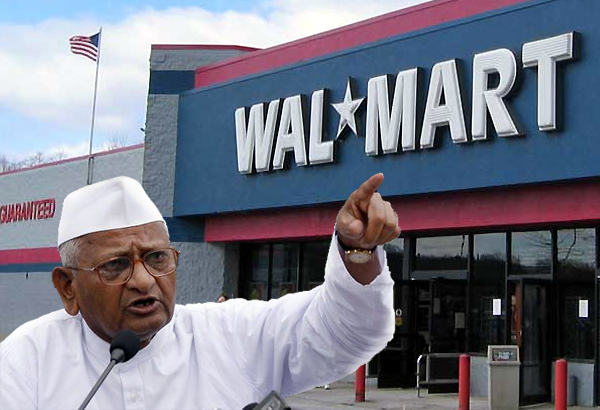 In the West, corporate retailers control the entire supply chain of food and farmers have no place to sell other than to select corporations. Initially the farmers will be paid as per their demand for their produce by the MNCs. Once the traders are gone, the farmers will be forced to sell at rates dictated to them. Retailers would push the farming community towards growing genetically modified seeds with extensive use of pesticides and chemicals which would impact land fertility intensively.

There is already 100 per cent FDI in the agriculture sector which doesn’t seem to have done any good. There is a vast scope of cold chains to be built and better post harvest techniques to be deployed. If Adani could invest in setting up C.A (Controlled Atmosphere) stores why can’t the so called philanthropists of India Inc. do so? Or are they freezing their money in Switzerland.

The focus should be on revamping the mandis infrastructure and using modern techniques so that the largest chunk of the consumer rupee goes to the farmer and in turn consumers pay lesser price for the commodity they purchase. E-farm is a small start-up which has made use of the best logistic and reverse-logistic practices along with modern sourcing and proper crop forecasting techniques which in turn would help to keep a tab on inflation. Such practices are essential in modernizing the agriculture sector.

Corporate don’t source from small farmers but carry out contract farming or approach large farmers. Small and medium farmers till this date approach the traditional system of mandis, retailers source from this channel mostly. The gap between demand and supply today is created by the middlemen by initially paying a higher price when the crop season begins and when the season is at its peak, the middlemen make the excuse of compensating for their losses by reducing the prices and the irony is that consumer is paying the same amount of money.

What is threatening is the reduction in the number of options the farmer is left with to sell his/her crop. Foreign retailers would replicate the same practices initially by wiping out the middlemen, then the small retailers and finally the street hawkers.

Eventually cartels would be formed by foreign retailers and prices would also be determined by them. Amul, the successful story of India’s dairy farming opposes FDI and Mr. Sodhi GCMMF’s Managing Director says “Farmers get the least returns from the modern trade and the so called efficiency benefits only the large retailers as they constantly drive down the prices” also integration with global retail chains, which operate across the world, will directly expose Indian consumers as well as Indian farmers to any future global turbulence.