In conversation with Rohan Joshi- a stand-up comedian, writer, columnist and scriptwriter.

Spanning across his views on stand-up comedy and writing columns this interview brings to life his razor sharp observations and wit.

As you’ve always mentioned in your acts, you started out as a journalist. How did stand-up feature into the scheme of things?

I just got tired of having a real job. Nah, kidding. This is India; I don’t think there’s a better grounding for comedy than journalism. You get to see all the absurd things that happen in this country (and indeed the newsroom) up close and personal. Also, on a personal level, I’ve always enjoyed making people laugh, so I guess this is just natural progression.

How did your career as a journalist influence your acts?

It made me a slightly keener observer of trends, people, and larger stories. That always helps!

Every set of yours seems well structured but do you go about planning the nuances or do you just go with the flow?

I think you plan it out, as far as you can. But ever so often, you’ll improvise just a little bit on the spot, or someone in the audience will say something, and you’ll spend some time on that. So you can plan only about 90 per cent of your act. The other 10 per cent, you’ve got to be willing to improvise on stage. It’d be a bit sad if someone in the audience said something, and I didn’t pause and address it. It’d be like trying to pretend the audience doesn’t exist, which is quite disrespectful to them.

You’re a part of an Improv comedy group, the Cardinal Bengans along with Weirdass Comedy. How easy or tricky is it to be equally witty impromptu?

It is pretty tricky, but it’s also a completely different head rush. The thrill of having to come up with material on the spot fully aware that you have no safety net is quite something. To put it simply, if stand-up is a sport, Improv is an adventure sport.

Has your twitter account, which has a massive following remained personal or has it partly turned into a public platform? Also, does the content you choose to put up get affected or altered because of this?

It has always been a personal platform, and always will be. However, I do use it to promote shows, because as a comedian I can’t afford to put out an advertisement in the paper every time I have a show. So if I can tell 23,000 people (all of whom follow me for a reason) about a show, then why would I not do that? But otherwise, it will always be a personal platform.

Yup! Watched tons of it, both videos and live. 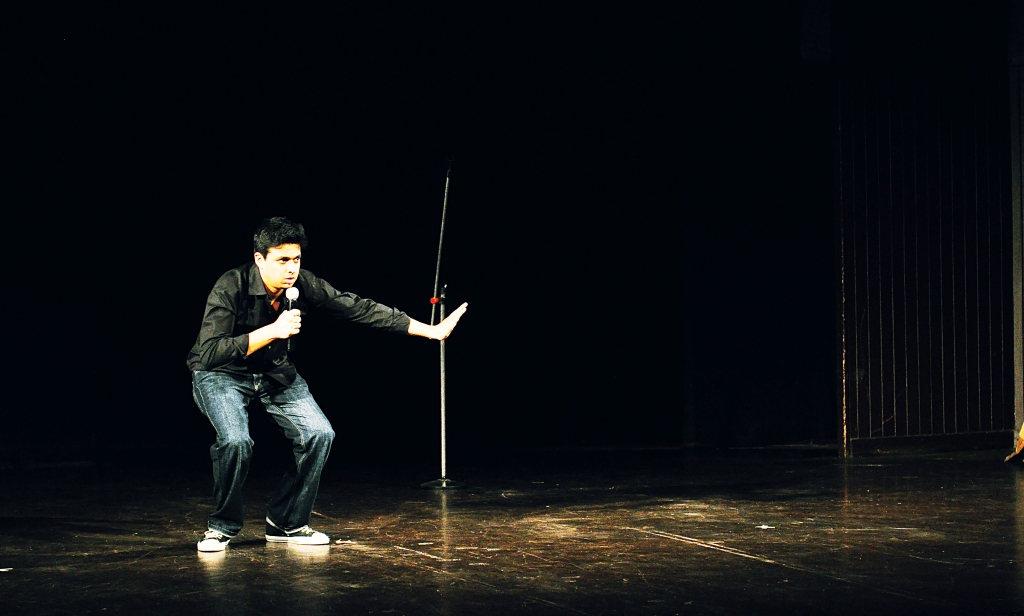 Which stand-up comedians do you hold in high regard and why?

So many! Jerry Seinfeld -clean, but such sharp observations about mundane things, Chris Rock-master performer, Louis CK- easily the best comedian in the world today. He manages to turn the inherent disappointments of life into such phenomenal comedy and Bill Hicks.

How is stand-up comedy measuring up as a viable career option in the current Indian scenario?

Pretty well! I’m proud to say it pays most of my bills now. I think you can make a career in stand-up comedy in India. But with so many people taking to it, you should also try it for a while before quitting your job to pursue it.

Like you’ve mentioned plenty, you’ve grown up in a multicultural family being part Gujarati and part Maharashtrian. How much do you draw on your cultural experiences and upbringing for material?

A fair amount of my content comes from my experiences with this regard. I think it is one of those things that make India unique and fantastic. We have so many cultures and rituals to draw upon and to talk about that are unique only to us. So I do draw upon my Gujarati and Marathi heritage and the behavior of my family periodically.

Do you think audiences in India get easily offended and have low tolerance levels?

Quite the contrary actually. We test the boundaries of taste and decency pretty often, and so far, nine times out of ten, we’ve come away unscathed and audiences are actually pretty receptive. On some level, I think audiences also like stand-up because it’s the one medium in which you can say things that you ordinarily wouldn’t be able to say on TV or in the paper, or anywhere else.

How does your content and audience reaction change with a change in the country you’re performing in/for?

For starters, if I’m abroad, I have to only use terms and jokes that people understand. For example, I can do a joke about the Kama Sutra while performing in London, but I can’t do one about ‘Baalika Vadhu’. They wouldn’t understand the reference. So I try to give my material a little more context when I’m abroad. But audience reaction, thankfully, hasn’t changed. It’s been pretty warm and positive.

You are also a weekly columnist for Mid-Day and humor works its way brilliantly through it. Is it a personal choice to stick to humor or would you like break away and write differently some day?

I do write differently occasionally, and a lot of my personal writing is quite serious. I don’t feel like I only want to stick with humor, and I don’t. Humor is something I enjoy doing on stage, but I’m just as happy writing a serious bit.

Also, do you feel people take you less seriously when you talk about important issues because of the pertinent humor quotient in your writing?

No, I think it’s the opposite. If you can make people laugh and see something, they’re more likely to be open to it, because you’re disarming them by making them laugh. Also, don’t forget, the most absurd truths are what we laugh hardest at. But sometimes, yes, people will take my opinion with a pinch of salt, and that’s actually a good thing. I’m not a financial analyst, so I’d be worried if anyone took a joke or column I wrote about the recession as solid advice.

Is any of your comedy message driven?

Good question! I’m not sure I have an answer.

What are your plans for the future?

Keep making people laugh, I hope. And in more than one medium!