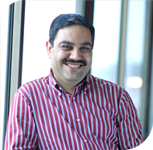 New Delhi: With four incisive books, Ravi Subramanian has firmly established himself as the John Grisham of the Indian banking industry and is going digital with his new work to reach out to his target audience – youngsters. He wants to “take them to a level where there is a fair interest in wanting to know more”.

“Some authors release a second or third chapter on the net. My publishers wanted to do something different. We’ve first put up the characters and then will be releasing the book chapter by chapter,”said  the Mumbai-based Subramanian, an alumnus of the Indian Institute of Management-Bangalore and a career banker and financial service professional.

By the time “The Bankster” (Rupa, Rs.250, 360 pages) is launched Oct 15, “we’ll have posted 50-60 percent of the book online. We hope this will create greater interest at the time of launch”, said Subramanian, who also has a degree in engineering and whose four works have so far sold 478,000 copies. This makes him Rupa’s second highest selling author after Chetan Bhagat.

So, what’s “The Bankster”, which builds on three previous books on the industry – “If God was a Banker”, “Devil in Pinstripes” and “The Incredible Banker” (the fourth was a work of non-fiction) – all about?

Three different plots intertwined with the strange happenings in the life of a set of retail bankers in the Greater Boston Global Bank bring up the initial part of the story. The uneasy calm in GB2 is shattered when a series of murders rock the facade of the compliant and conforming bank that GB2 has built up over the years. Who is to blame? Who is driving these intriguing and bone chilling murders? What is the motive behind these gruesome killings? No one has a clue.

In the racy buildup to unraveling of the ‘who-done-it’ plot, stranger than fiction characters emerge, faith get shattered and ivory towers come crashing down. Bankers build their careers on trust, or so everyone thought…till the day the truth within GB2 gets revealed. Is the banker at GB2 fast turning into a Bankster? Or was he always one?

Subramanian, 42, confesses that along with success has come an element of “confusion”.

“I have enough stories for five or six books but I wonder whether I should explore new segments. There is some confusion in my mind whether to continue to write on banking or try newer pastures,” said the author, who also has a regular column in The Economic Times.

“The feedback I get says it makes sense to continue in the present genre. But the day I feel I’m not able to keep my stories fresh I’ll switch, but at this point, that’s not been reached,” he added.

Given Subramanian’s track record, it would be a long time indeed before he should think in terms of switching genres.

He, in fact, hit pay dirt with his very first novel, “If God was a Banker” (2007), which details the journey of two young management graduates who get to join an international bank on the same day and take two entirely different routes to success. An insider’s fictionalised account of how Indian professionals experience the world of foreign banks, the story spans three continents.

It became a national bestseller, selling over 200,000 copies and being widely appreciated by readers across genres and age-groups. It also won the prestigious 2008 Golden Quill Reader’s Choice Award.

“I Bought the Monks Ferrari”, which also came out in 2007, is Subramanian’s only non-fictional work in which he looks at how to aspire for success – for instance, through the journey of Naina Lal Kidwai, P.S. Jayakumar, Tony Singh and Ajay Bimbhet, among others. It sold 65,000 copies.

Then came “The Devil in Pinstripes” (2009, 105,000 copies) about the susceptibilities of a couple who work in a foreign bank and “The Incredible Banker” (2011, 108,000 copies) that deals with Maoists who infiltrate the credit card operations of a foreign bank to launder money to fund their terror operations. This work has earned Subramanian the Economist-Crossword Award in the People’s Choice category.

All this from a financial professional who began his career in 1993 in Bangalore with the Tatas and IBM and shifted four years later to Chennai, where he worked with ANZ Grindlays Bank. Moving to Delhi, he was with Citibank for five years before shifting his base in 2005 to Mumbai (Shriram Group), where he resides with his bio-technologist wife-turned-banker Dharini and daughter Anusha.

What then sparked the author in Subramanian?

“I always felt that one needs to be remembered long after one has gone. After my first book, I figured that since it was successful, I wanted to continue things better. Given my extensive background in foreign banks, writing about them came quite naturally to me. Thankfully, god has been kind to me,” he said rather modestly.

Subramanian’s new work can be accessed at www.facebook.com/authorravisubramanian.