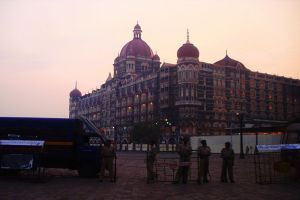 Islamabad: External Affairs Minister S.M. Krishna said Saturday that there was no question of India backtracking on the sensitive issue of the 26/11 Mumbai terror attack even as India and Pakistan move forward in their dialogue. “Mumbai is very much on the table. They (Pakistan) will have to take follow up action on that. India is not going back on it,” Krishna told visiting Indian journalists here at the end of a day of talks with his Pakistan counterpart Hina Rabbani Khar. “There is no question of bypassing 26/11. What happened in the immediate past is very much on the table,” he clarified to queries if India had agreed to overlook the Mumbai terror attack to take the dialogue process with Pakistan forward. Both ministers had earlier Saturday said that the relationship between India and Pakistan could not be held hostage by the past. Asked what he thought of his counterpart Khar not making any reference to terrorism during her long statement at their joint press conference here Saturday, Krishna said: “What is material for me is the joint statement which mentions terror. The joint statement is a document and she (Khar) is a signatory to that.” On the question of a visit by Prime Minister Manmohan Singh to Pakistan, which Pakistan wants should happen soon, Krishna said that no conditions, like action on the Mumbai terror attack, were attached to it. “The question of any condition does not arise as of now. The PM’s visit needs a lot of preparation. There is no commitment that I could make. It is for the PM to decide (on the invitation),” Krishna said. He said that India was committed to a step by step approach on all issues with Pakistan. “The prime minister has already said that we are not afraid of the Kashmir word. We are ready to talk on that. We are here to approach Pakistan on any issue,” he said. Assessing his visit this time, Krishna said that “this (visit) one is much better than what was two years back”. About the release of Indian prisoner Sarabjit Singh, who is on a death row and lodged in Pakistan’s Kot Lakhpat jail in Lahore, Krishna said that he had raised the issue with Pakistan President Asif Ali Zardari. “He (President Zardari) has taken it seriously and asked his office to take note. We are seeking his (Sarabjit’s) release on humanitarian grounds based on his age, health and the fact that he has spent over 20 years in jail,” the minister said.