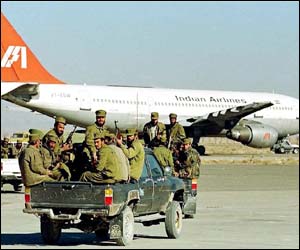 Srinagar: In a major breakthrough, J&K Police today claimed to have arrested a top militant, suspected to be one of the main accused who had provided logistical support to hijackers of IC-814 in 1999 and was operating in the state for the past 25 years.

His name had figured in the IC-814 hijack case as he had provided logistical support for hijacking of the Indian aircraft to Kandahar from Nepal, the officer said.

The Indian Airlines plane, with mainly Indian passengers, had taken off from Nepal on December 24, 1999 and just as it entered Indian airspace, the militants hijacked it to Kandahar in Afghanistan. The hijackers also killed one passenger.

The hijacking ended when the Indian government released three militants including Maulana Masood Azhar and Ahmed Omar Saeed Sheikh for the safe return of the passengers.

Mehrajuddin was one of the first five militants including Salahuddin who crossed over into PaK in 1987 to get arms training.  He belngs to the Sopore town of north Kashmir and was a member of UJC, an umbrella group of several militant outfits.

Senior police officers in Kishtwar said Javed comes from Sopore, Kashmir’s apple-growing town 50km (31 miles) north of Srinagar city. He was also believed to have been involved in the 1996 bombings at Delhi’s busy Lajpat Nagar market, they said.”He crossed over to Pakistan in 1992. Now, he had returned via Nepal and was planning militant activities and was recruiting youth,” a top police official who did not wish to be named told Hill Post.

However his family says that Mehrajuddin is in the last stages of life as he is suffering from brain tumour.

“Mehrajudin was working as a businessman in Nepal and his family has no knowledge about his subversive activities. He contacted us on phone on September 09 saying he was suffering from brain Tumour and was coming to join us. Since then we have not heard from him and nobody has informed us about his whereabouts” Abdul Rashid, Mehrajudin’s elder brother said.

Family says that Mehrajuddin was first arrested by the Central Reserve Police Force (CRPF) in Sopore in 1991.

“He was booked under the Public Safety Act in 1991 and lodged in the Kotbalwal jail in Jammu,” Rashid said.

“After his release, we convinced him to lead a normal life. He shifted to Nepal where he married a local girl and did business there. Of late, he has been facing serious health problems, probably a brain tumor, for which he was getting treatment in Nepal. He informed us that he was not getting any relief from his treatment and therefore wanted to join us so that we could take care of him,” he said.

On Mehrajuddin’s involvement in the hijacking of Indian Airlines flight IC-814 to Kandahar, Abdul Rashid said he had no knowledge about it.

“I don’t know anything about his alleged involvement in the hijack,” his brother said.