A mega event, greater than the T20-World Cup, which happens once in four years, the World Conservation Congress, concluded on 15th September in South Korea.  This year environmentalists focused to develop their research on natural science, thus directly impacting all living creatures as well as humankind.

All the ‘green guys’ met in Korea and the aim was to resolve the growing economic and social issues at the global level, by bringing more and more natural resources into the picture. Major decisions taken at the meet were preparing a Red List of Ecosystems that will harmonize the IUCN Red List of Threatened Species and other IUCN knowledge products.

According to experts, preparing the Red List will be an effective information source of the bio diversities in various corners of the globe, and thus would prove helpful in preventing those bio diversities from ecological issues and problems.

Another interesting outcome of the meet was a resolution to conserve the mangrove systems worldwide. Apparently, mangrove systems are not that popular, as not many people are aware of the benefits which they bring to the ecological system. Mangrove systems were underrated in the modern world, until the tsunamis shook the world in the years 2004 and 2011.

It has been proved that mangrove trees help in taming the tides and safeguarding the valuable and sensitive shorelines of wildlife. These unique jungles are disappearing faster and earlier than any other tropical forests. Once being called one of the most productive wetlands on earth, the mangrove trees are known to be of great help and serve the wildlife a great deal.

These coastal tropical forests have now become one of the most threatened habitats in the world, and are at the verge of extinction. This not only gives a genuine room of thought for the environmentalists worldwide, but is also an issue of global concern, especially after the mangrove system benefits have come into light after some terrible natural disasters shattered the world since the last decade.

Mangrove trees and ecosystems are found in the inter-tidal areas and along the river mouths between the land and sea. It is home to a large and distinct collection of marine wildlife, especially in the Indian subcontinent as it welcomes healthy mangrove forests which are largely getting plundered today. Not many people realize that these healthy mangrove systems are the key to a healthy marine ecology, which eventually leads to a developed and balanced wildlife system.

In 1987 GOI stated that India lost about 40 percent of its mangrove systems in the last century. Though management of mangrove areas in India is slowly pacing up, the Coastal regulation Zone Notification, which serves as the legal body to protect this ecosystem under its terms and policies, has failed to protect the mangrove areas against the rapid industrialization and increasing pollution of the country. 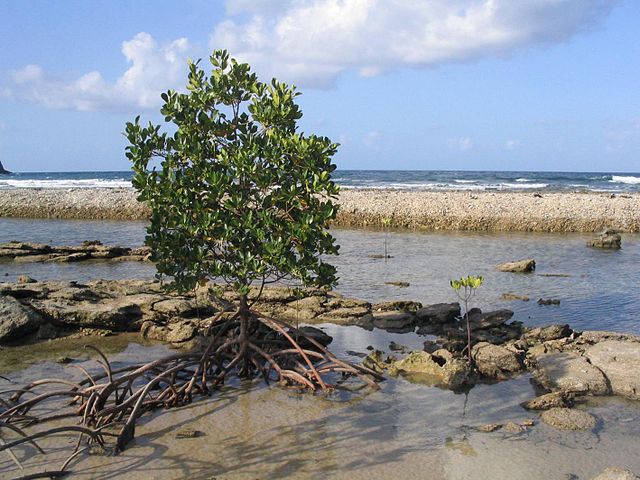 Most of the people around do not have the slightest clue of how mangrove trees even look like, leaving alone the consideration of them being largely helpful for the ecosystem. The problem of not creating awareness and very less knowledge among people has added up to the extinction possibilities of this ecosystem.

The benefits of these mangrove trees might have come out too suddenly in the limelight, and people might also consider it as a decision taken too late by the nature enthusiasts of the globe, especially after keeping in mind the rapid disappearance of some vast Mangrove ecosystems, but ‘It is never too late’.

Better now taken the decision than never having considered such an issue at the global level, as it would surprise the world that something such as Mangrove trees, which was considered so worthless and of no importance till date could all of a sudden garner attention from every corner of the world, and the protection of which would help in maintaining a healthy marine ecology.